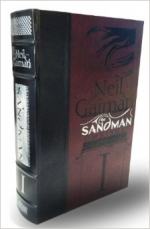 Neil Gaiman
This Study Guide consists of approximately 37 pages of chapter summaries, quotes, character analysis, themes, and more - everything you need to sharpen your knowledge of The Sandman.

The Sandman Summary & Study Guide includes comprehensive information and analysis to help you understand the book. This study guide contains the following sections:

This detailed literature summary also contains Topics for Discussion and a Free Quiz on The Sandman by Neil Gaiman.

The Sandman comic books follow the mythical figure the Sandman, the king of dreams. The graphic novel Dream Country includes four stories. In the story "Calliope," a muse is kidnapped by a writer and freed by the Sandman. "A Dream of a Thousand Cats" tells the story of a misused house cat and her mission to reclaim power for all cats. In "A Midsummer Night's Dream," the Sandman commissions Shakespeare's famous play, A Midsummer Night's Dream, for the fairy folk. Finally, "Façade" tells the story of a woman who gains superpowers but loses her beauty and longs for death.

"Calliope" tells the story of a writer named Richard Madoc who, after the publication of his first novel, has been suffering from writer's block for a year. Madoc trades a supposedly magical stone called a bezoar for one of the Greek Muses, Calliope. Madoc keeps Calliope imprisoned and rapes her, and in turn he is inspired, becoming a rich, famous, and acclaimed writer and director. Calliope begs the other gods for help, but most of the gods are gone or without power. Finally, Calliope's old lover, Oneiros, who is the Sandman, comes to free her. When Madoc refuses to free Calliope, the Sandman floods his mind with ideas, driving him mad and forcing him to free the muse.

"A Dream of a Thousand Cats" is told from the perspective of a small kitten. She goes out to the graveyard to see a Siamese cat speak. The Siamese preaches for cats to dream of a world where cats are dominant over humans. She was once a house cat, and her owners drowned her litter of kittens. She went on a quest to see the Sandman and learn the truth about her inferirority, and she had a vision that cats once ruled Earth. When enough humans dreamed they were dominant, they changed reality. The Siamese now preaches for all cats to dream together that they are Earth's dominant creatures, thus bringing about change to reality again.

In "A Midsummer Night's Dream," the Sandman commissions William Shakespeare to write the play A Midsummer Night's Dream for the fairy folk, who live in another dimension. Shakespeare's troupe travels to the country to perform the play, and the fairy folk are pleased with the performance. The fairy Puck, or Robin Goodfellow, kills the actor playing his part and takes over his role for the end of the play. At the end of the play, the fairies depart to their home dimension, but Puck stays behind, disappearing into the human world. The players are left to wonder if the whole experience is only a dream.

"Façade" is the story of Ranie Blackwell, a former CIA agent who has been changed by the Egyptian sun god Ra into a metamorph. With her mind, she can manipulate matter and change it into anything she wants. However, her body is now distorted and ugly, and she no longer leaves her house. She meets with a friend but runs out when her mask, which hides her disfigurement, falls off. Back at her home, Ranie is visited by Death. Ranie wants to kill herself, but she cannot because she doesn't know how to die. Death tells her to consult with Ra, the sun. As Ranie gazes at the sun, she turns to powder, finally released from life.

More summaries and resources for teaching or studying The Sandman.

The Sandman from BookRags. (c)2022 BookRags, Inc. All rights reserved.