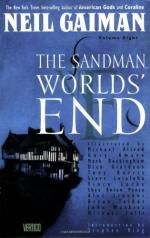 Neil Gaiman
This Study Guide consists of approximately 32 pages of chapter summaries, quotes, character analysis, themes, and more - everything you need to sharpen your knowledge of The Sandman Vol. 8.

This detailed literature summary also contains Topics for Discussion and a Free Quiz on The Sandman Vol. 8: World's End by Neil Gaiman.

Brant Tucker and Charlene Mooney work together and decide to share travel expenses on a drive to Chicago. In the early morning hours of June, it begins to snow and then something runs in front of the car—Brant swerves off the road and the car smashes into a tree. Brant carries Charlene to a distant inn—the Worlds' End—where she receives medical assistance and he drops into a deep and long sleep. Upon awakening, Brant discovers Charlene sitting with several strange beings, including a fairy, a centaur, and some dead-looking persons. They have all sought refuge in the inn from a violent storm raging outside. The people at the table while away the hours swapping stories. Finally the storm outside breaks and the various travelers depart the inn, heading back to their own prior lives. Charlene decides to remain behind and Brant exits to discover he alone retains any memory of her.

The bulk of the narrative is devoted to a series of stories, and stories within stories, that the various travelers at the Worlds' End Inn tell each other to pass the time. Throughout all the stories it should be recalled that Brant Tucker is the overarching narrator, relating the events in the past-tense. The first story is told by Gaheris, and he relates a story told to him by a man named Robert. Robert had adventured through a dreamscape of a city for a prolonged period of time before eventually escaping back to reality, moving to a desolate area, and telling the story to Gaheris who relates it as part of Brant's narrative. The second story is narrated by Cluracan, a fairy ambassador, who insists that the bulk of his narrative is autobiographical, though he does admit to some embellishment. Cluracan travels from fairyland to the city of Aurelia in order to frustrate a proposed alliance of several cities. The political situation is not explored in depth, except that the temporal rule of Aurelia is also the spiritual leader of the land. Cluracan observes events and arranges for the leader to be ousted. The third story is narrated by a girl who calls herself Jim. Jim has disguised herself as a boy and lived a life upon the sea during c. 1914 as a common sailor. Jim relates a story of sea serpents, storms, and passengers who are apparently immortal. Note that one of the passengers relates a story-within-a-story.

The fourth story is told by an unnamed person directly to Brant—the story is about a young man named Prez Rickard who becomes President of the United States in an alternative reality. Prez is fully dedicated to the greater good and successfully struggles to subjugate his personal desires to the pressures of his office. The fifth story is related primarily by Petrefax, a strange dead-looking humanoid. Petrefax comes from a place where the entire culture is devoted to the disposal of the dead and he tells a story with a complicated narrative involving multiple layers of stories-within-a-story elements. Several stories include minor appearances by Morpheus, though he appears by several names.

Finally the storm breaks and the various travelers depart, returning to their own realities. Some decide to go onwards, while Charlene decides to remain at the inn. Brant returns to his real world and discovers that he alone has any memory of Charlene's existence. He sits in a dingy bar drinking, and relates the overall narrative to an unnamed barkeep. After he finishes his story, she closes the bar and the two characters go their separate ways.

More summaries and resources for teaching or studying The Sandman Vol. 8: World's End.