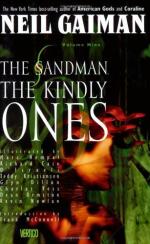 The Sandman: The Kindly Ones Summary & Study Guide

Neil Gaiman
This Study Guide consists of approximately 41 pages of chapter summaries, quotes, character analysis, themes, and more - everything you need to sharpen your knowledge of The Sandman.

The Sandman: The Kindly Ones Summary & Study Guide Description

The Sandman: The Kindly Ones Summary & Study Guide includes comprehensive information and analysis to help you understand the book. This study guide contains the following sections:

This detailed literature summary also contains Topics for Discussion and a Free Quiz on The Sandman: The Kindly Ones by Neil Gaiman.

THE KINDLY ONES follows Lord Morpheus, the master of dreaming, in his conflict with the Furies, who externalize his internal conflict over having killed his own son. Morpheus has told Lyta Hall that he will some day come for her son Daniel, and when Daniel disappears and she believes him dead, Lyta goes on a quest in the dream world to find her revenge. Daniel, however, is in the Dreaming, rescued by Morpheus's minions. Lyta no longer wants revenge, but the Furies are already set in motion. Morpheus, facing his own guilt, chooses to go with his sister Death, leaving young Daniel the heir to the Dreaming.

Lyta Hall is a former superhero called the Fury. For several years, she was pregnant with her dead sweetheart's child while held in the Dreaming, the realm of the Lord Morpheus, Dream. Morpheus has said he would one day come for her child, Daniel, and Lyta is afraid to leave him. However, while she's out one day, Daniel disappears. Two supernatural creatures, the Norse god Loki and the trickster Puck, disguised as policemen, tell Lyta that her son is dead. However, Puck and Loki have stolen her son, and they are holding him in a supernatural realm, where they are purging him with fire.

Lyta is certain Morpheus has stolen her boy. She separates from reality, retreating into the Dreaming, where she goes seeking the mythological Furies to take revenge on Morpheus. When Lyta finds the Furies, at first they refuse to help her, saying they can only punish someone who has killed his own blood. However, Morpheus has killed his son, Orpheus. The Furies and Lyta join and begin attacking the Dreaming, tearing it apart, as Morpheus sends two of his minions to recover Daniel.

Meanwhile, Nuala, a fairy and a gift to Morpheus, is called back to Faerie by her brother and the queen of Faerie. Nuala is secretly in love with Morpheus and is saddened that he lets her go easily. Morpheus gives her a pendant to call him when she needs him, and when Nuala learns, first from Puck and also from Delirium, Dream's sister, that Morpheus is in trouble, she calls on him to come to her, hoping to help him. However, Morpheus leaving the Dreaming allows the Fates to gain ascendancy.

When Morpheus returns to the Dreaming, his kingdom is being torn apart. The Furies will not back off, even though Lyta wants to stop when she sees that her son, who has been brought to the Dreaming, is not dead. Dream's only option is to go with his sister, Death. He passes on the role of Lord Morpheus to the child Daniel before choosing to go with Death, a fitting resolution for his tiredness with his responsibilities and his guilt over his son Orpheus's death.

The Sandman: The Kindly Ones from BookRags. (c)2022 BookRags, Inc. All rights reserved.