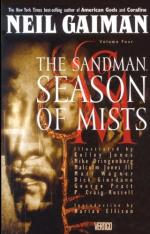 Cluracan of Faerie, accompanied by his sister Nuala, arrives in the Dreaming as a representative of Faerie and its rulers Queen Titania and Lord Auberon. He tells of an ancient debt that forces the kingdom of Faerie to pay a tithe of blood to Hell, and he requests that instead of giving over possession of Hell, Dream keep it locked and empty, so that the tithing that Faerie is subjected to will cease.

The guests dine in a great hall, and are served by dreaming mortals. For their after dining entertainment, Cain performs magic, sawing his brother Abel in half. Dream then addresses them, telling them to return to their quarters and that he will send for each of them in turn, so that they may have a private audience with him.

Back in their quarters, the demon Choronzon and The Merkin begin...

(read more from the Episode 5 Summary)