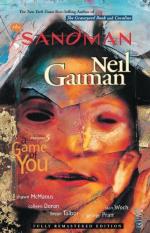 Plot Summary
+Chapters Summary and Analysis
Chapter 1, Slaughter on Fifth Avenue
Chapter 2, Lullabies of Broadway
Chapter 3, Bad Moon Rising
Chapter 4, Beginning to See the Light
Chapter 5, Over the Sea to Sky
Chapter 6, I Woke Up and One of Us Was Crying
Free Quiz
Characters
Objects/Places
Themes
Style
Quotes
Topics for Discussion
Order our The Sandman: A Game of You Study Guide

The Sandman: A Game of You Summary & Study Guide

Neil Gaiman
This Study Guide consists of approximately 50 pages of chapter summaries, quotes, character analysis, themes, and more - everything you need to sharpen your knowledge of The Sandman.

The Sandman: A Game of You Summary & Study Guide Description

The Sandman: A Game of You Summary & Study Guide includes comprehensive information and analysis to help you understand the book. This study guide contains the following sections:

This detailed literature summary also contains Topics for Discussion and a Free Quiz on The Sandman: A Game of You by Neil Gaiman.

The Sandman: A Game of You written by Neil Gaiman is volume five in a series of graphic novels. Barbie is a young woman who is plagued by her involvement in a dream world called the land. Other inhabitants of the building she occupies get involved in an effort to save Barbie and themselves from the mischief of the Cuckoo. The Sandman: A Game of You is a look of the inner fantasies within a person and a suggestion that perhaps everyone has more going on inside than can be seen from the outside.

Luz fears they will all perish and the Cuckoo will reign, but Martin Tenbones believes that Princess Barbara is just lost in her other world and plans to find her. Wanda wakes Barbie to go shopping, and Barbie insists that she does not dream. They encounter a beggar woman who is scared of dogs on their way to breakfast, where Wanda insists that everyone dreams, and Barbie remembers that in her old dream, her best friend was a large dog and the land was in terrible danger. Wanda admits that she was born "Alvin". A big dog on the street searches for Barbie; he sees her and gives her the Porpentine as he is shot and killed. Wanda takes Barbie back to her room where Barbie tries to convince herself that it is only a dream. Meanwhile, George says that the children of the Cuckoo know all about Princess Barbara.

Hazel comes to Barbie for advice because she fears she is pregnant. Hazel thinks that Barbie looks like she needs sleep, but Barbie is scared to sleep and watches television. Barbie dreams and has hallucinations, such as Nuala warning her that something bad is coming, before she finally falls asleep and pushes through curtains to find Wilkinson, Luz and Prinado. George waits patiently until one o'clock in the morning when everyone is asleep before cutting open his chest and releasing birds that land on Wanda, Hazel and Foxglove causing them to have nightmares. One bird lands on Thessaly, but it wakes her and she kills it. Thessaly dresses and goes to George's apartment with a knife concealed behind her back. Barbie is greeted by Wilkinson, Luz and Prinado and tells them that she kind of remembers the dream. She confirms Martin Tenbones' death, but she remembers that she must get to the Brightly Shining Sea so they had better get going.

As Foxglove and Hazel wake from their nightmares, Thessaly knocks on their door to ask if they are alright and asks them to help her check on Wanda and Barbie. She says "stuff" is happening. Wanda cries over her nightmare, but Thessaly says she is worried about Barbie. Wanda uses her spare keys to get them into Barbie's apartment where she finds Barbie asleep, holding the Porpentine. Thessaly tells them not to touch the jewelry and asks Wanda to carry Barbie to George's room. Wanda, Foxglove and Hazel think Thessaly and George are weird and think so even more when they learn that Thessaly killed George. Thessaly will not allow them to leave, and Wanda finds that she is unable to leave. Thessaly explains that George was sending birds to cause their nightmares and she needs to talk to him about it. To the other girls' confusion, Thessaly cuts the skin from George's face and calls him to speak the truth, asking who he is and why he tried to harm them.

Thessaly learns that the Cuckoo from Barbie's dream sent him to try to destroy the Porpentine. Thessaly wants revenge against the Cuckoo for trying to harm her while the others are upset that it tried to hurt Barbie. Thessaly uses Foxglove's menstrual blood to call down the Moon in order for them to enter Barbie's dream. At first, the Moon refuses to assist Thessaly but agrees at her insistence. Meanwhile, the beggar woman worries that the Moon looks strange and disappears. Wanda stays to guard Barbie and tells her friend that she cannot handle this, and George asks to talk to Wanda.

Barbie is at the most dangerous part of her journey. She remembers the Hieromancer and the Tantoblin whose corpse they find carrying a message for them. They bury him and take shelter in a cave to read his message, which includes notes about the European Cuckoo laying eggs in other birds' nests and pictures of Barbie as a child. The Black Guard passes closely. Barbie sleeps but does not remember dreaming as Nuala admits to Morpheus that she tried to warn Barbie. Barbie and the others gather food for breakfast and discuss the fact that no one knows what to do with the Hierogram. They tell Barbie that the land is old and Barbie comes there to dream. Luz notices someone watching them in the woods. Prinado scouts their way, but one day, he does not return. Barbie wakes to Prinado's corpse and the Tweeners' threats.

The Porpentine lights their way to an old path that leads them to the city and the sea. Luz goes to seek the resistance while Wilkinson guards Barbie. In New York, George tells Wanda that she was left behind because chromosomes dictate that she is a man. He also says that messing with the Moon is dangerous and Wanda should worry about the weather. As Thessaly is gone, her commands no longer hold, but Wanda will not leave Barbie. Barbie worries about Luz and is sad about Prinado, but Wilkinson tells her that they have good luck. Luz returns with the Black Guard who kill Wilkinson and capture Barbie, taking her to the Citadel of the Cuckoo, which looks like the house in Florida where she grew up.

As Barbie recognizes the Citadel of the Cuckoo as her childhood home, a young girl joins Barbie who reveals herself to be Barbie as a child and the Cuckoo. The Cuckoo explains that Barbie lived a dully childhood and imagined a land where she was a princess. It introduces Barbie to the toys from her childhood: Prinado, Wilkinson, Luz and Martin Tenbones. The Cuckoo bewitches Barbie to agree that it has a right to live and be happy even if that means killing Barbie. Thessaly, Foxglove and Hazel walks the Moon's Road into Barbie's dream where they find Wilkinson's body, and Thessaly revives it for directions to the Cuckoo and Barbie. Foxglove yells at Hazel about her pregnancy. In New York, the storm rages, and George worries Wanda when he points out that Barbie's necklace is flickering. Wanda hears the beggar woman outside in the storm and takes her upstairs. Luz is happy for the Cuckoo but will miss it. The Cuckoo takes Barbie to the Isle of Thorns and expresses impatience for the moon to rise so that it can fly. When Thessaly, Foxglove and Hazel approach, the Cuckoo runs to Thessaly and claims that Luz is the Cuckoo, causing Thessaly to kill Luz.

After the Cuckoo bewitches Thessaly, Foxglove and Hazel, it wakes Barbie and explains that as long as the Hierogram and Porpentine exist, the world lives so they must be destroyed them in order for the Cuckoo to fly. The beggar woman tells Wanda about her cross-dressing grandson who was murdered but refuses to talk to George. The Cuckoo tells Barbie it is time, and as Barbie destroys the Porpentine, it disappears from around her neck in New York, worrying Wanda. A radio announcer declares that a hurricane has hit New York. In the land, Morpheus, the Dream King, arrives, realizes the Cuckoo did not call him, and releases Barbie from its mind control. He puts the land to rest by calling the people into his robes and crumbling the land in his hand. Then, Morpheus chides Thessaly, Foxglove and Hazel for the trouble they have caused, telling them they are there as trespassers. He refuses Thessaly's demand of the Cuckoo's life. Thessaly acknowledges that they are in big trouble because they have no way to get home. George no longer feels the land and does not know if the girls are alive. The hurricane arrives and the beggar woman throws herself on Barbie as the building crumbles.

Barbie, dressed in mourning, gazes in the mirror. Barbie learns that Morpheus is not going to kill the Cuckoo. Morpheus is displeased with Thessaly, Foxglove and Hazel and threatens to leave them there. He tells Barbie that she may ask a boon of him, and after thinking, she asks him to send them home safely. This means the Cuckoo can fly; it thanks Barbie, turns into a bird, and flies away. Mourning Barbie laments her dream. Morpheus says that it will be a while before they can return safely, and he leaves them all with some advice. Mourning Barbie recalls sitting on the sand for a long time and then the sensation of waking. She walks out of the bathroom though the diner and sits with Dora who calls Wanda a sinner and requests that Barbie tell the Manns about their son, Alvin. Barbie tells Dora that she dreamt through the hurricane and woke wet, saved only by the beggar woman on top of her.

Barbie is pulled out of the rabble in front of a television crew. Then, she sees Wanda and has hysterics. Dora reminds Barbie that it is time for the funeral though Barbie misses the open coffin. Barbie mourns for Wanda's hair, her pride, when Dora says that they cut it. Dora introduces Barbie to Mrs. Mann who says that the hurricane was God's judgment on a city of sinners. Barbie does not mind when she learns that Mrs. Mann does not want her in their home because Barbie wants to talk to Wanda. She wishes Wanda could tell her what happened and expresses her newfound belief that everyone has secret worlds inside of them. She crosses "Alvin" off the tombstone and writes "Wanda" in Wanda's favorite lipstick. When Barbie tells Dora about her dream world, their ride continues in silence. Barbie remembers dreaming on the bus of seeing a perfect Wanda waving to her, but Barbie woke before she could wave back. She gets off the bus and waves to it because she believes you should always say goodbye before it is too late.

More summaries and resources for teaching or studying The Sandman: A Game of You.

The Sandman: A Game of You from BookRags. (c)2022 BookRags, Inc. All rights reserved.