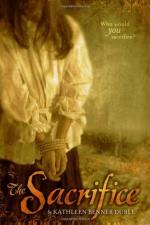 Kathleen Benner Duble
This Study Guide consists of approximately 34 pages of chapter summaries, quotes, character analysis, themes, and more - everything you need to sharpen your knowledge of The Sacrifice.

The Sacrifice Summary & Study Guide includes comprehensive information and analysis to help you understand the book. This study guide contains the following sections:

This detailed literature summary also contains Topics for Discussion on The Sacrifice by Kathleen Benner Duble.

"Sacrifice" by Kathleen Benner Duble is the story of the horrors that a family endured during the Salem witch hunts and subsequent trials in the late seventeenth century in Massachusetts. The main character is ten-year-old Abigail Faulkner. She is a free-spirited young girl who is strong and opinionated and is very much like her loving mother, Hannah. The story opens with this child being punished with a six-hour sentence in the stockades. The backdrop of the story is the stringent and judgmental society that existed at the time. The Puritanical tenets under which the people were required to live were harsh, unyielding and unreasonable. The "sin" that the ten-year-old committed was holding her skirt a few inches off the ground so she could run. Girls couldn't run in that community and they certainly couldn't pull up their dresses even if it only revealed their ankles.

Hannah, Abigail's mother, had the same high-spirited nature as her daughter. However, she had no choice but to endure her daughter's punishment even though she knew it was unfair. Abigail's Grandpappy, The Reverend Dane, was the minister at the meetinghouse. Abigail dreaded going to the Sunday service because she was certain she would be the focus of gossip and derision, and the main topic of her grandfather's sermon. But she was wrong: Grandpappy's sermon centered around lying and how it was a violation of the Ten Commandments.

Later, Grandpappy told his family that he decided to sermonize about lying because of an ominous trend that was occurring, one that was far more ominous than a ten-year-old running through a meadow. Young women in Salem, a short distance away from their community of Andover, were being accused of practicing witchcraft. The penalty for working in league with the devil was death or life imprisonment. The Faulkners were shocked but certain that this madness would not spread to Andover.

However, a disgruntled former maid of the family went to the authorities and claimed that Abigail and her older sister, Dorothy, were witches. And Abigail's Aunt Elizabeth was also allegedly a witch. The two young girls and their young aunt were all imprisoned in a horrific prison that was filled with bedbugs, louse and rats and were shackled to the wall with chains.

Hannah was outraged and would stop at nothing to win her daughters' and sister's freedom. Abigail's father, Francis, was a passive man who many perceived to be weak. He suffered from spells in which he heard voices and talked to invisible people. Hannah knew it was up to her to get her daughters back home where they belonged. She devised a scheme in which she won the liberty of her daughters by replacing them in prison with herself.

Although Hannah is still imprisoned when the story ends, there are signs that people, including the governor of the state and Grandpappy, are on the pathway that will end the madness that has taken over the community.

More summaries and resources for teaching or studying The Sacrifice.

The Sacrifice from BookRags. (c)2022 BookRags, Inc. All rights reserved.