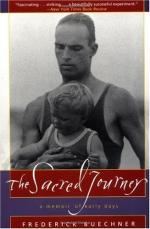 Frederick Buechner
This Study Guide consists of approximately 21 pages of chapter summaries, quotes, character analysis, themes, and more - everything you need to sharpen your knowledge of The Sacred Journey; a Memoir of Early Days.

The Sacred Journey; a Memoir of Early Days Summary & Study Guide includes comprehensive information and analysis to help you understand the book. This study guide contains the following sections:

This detailed literature summary also contains Topics for Discussion and a Free Quiz on The Sacred Journey; a Memoir of Early Days by Frederick Buechner.

"The Sacred Journey; a Memoir of Early Days" examines the journey and transitions that lead to Frederick Buechner's conversion to Christianity. From early childhood, many little moments combine to give him the message that what he is always seeking Jesus, and he comes to terms with this in his early twenties.

During Freddy's childhood, his family moves around constantly, as his father searches for work during the Great Depression. When Freddy is ten years old, his father kills himself one morning. This is the moment when Freddy begins to be aware of the passage of time, and of the approach of death. Freddy is unable to grieve for his father for many years.

Freddy, his mother, and his little brother Jamie move to Bermuda for a little while to get away from the painful situation. Freddy loves Bermuda, thinking of it as the Land of Oz from his favorite series of books. The family is forced to leave Bermuda when World War II breaks out in Europe, and there are rumors that the island will be used by the Germans. They move back to the United States, moving in with Freddy's grandparents. Freddy goes off to boarding school, where he makes friends for the first time, being a bookish, nerdy boy who hates the outdoors. Freddy realizes that he wants to be a writer, and he does his best to write good poetry.

Freddy goes to Princeton University for a while, taking off some time to train in the army for war. When he learns that his father's brother has also committed suicide, Freddy is terrified that he has inherited a death wish, which causes a panic attack during basic training. He turns out to be unfit for combat, and he gratefully returns to school, but with a new appreciation of education. Happy to not be out fighting a war, Freddy applies himself to his studies, and begins his first novel, starring his favorite character from the Oz books. After graduation, he ends up teaching at his old high school, and is surprised when a publishing house decides to publish his first novel. Trying not to let fame go to his head, Freddy tries a handful of different careers, but nothing works out. He feels that he is always searching for something elusive, and finally he realizes that what he is looking for is Jesus Christ. Freddy enrolls in seminary, feeling that God has provided him with the same magical tools as the King of Oz had at his disposal. In Oz, they are three magical pearls, but in real life, Freddy has found faith, hope, and love.

More summaries and resources for teaching or studying The Sacred Journey; a Memoir of Early Days.

The Sacred Journey; a Memoir of Early Days from BookRags. (c)2022 BookRags, Inc. All rights reserved.