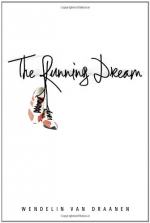 Wendelin Van Draanen
This Study Guide consists of approximately 46 pages of chapter summaries, quotes, character analysis, themes, and more - everything you need to sharpen your knowledge of The Running Dream.

In "The Running Game" by Wendelin Van Draanen, Jessica is hospitalized after an accident. A vehicle crashed into her bus after a track meet and she is now missing one of her legs below the knee. She ran a 400 m race in 55 seconds flat during her last meet, but now it takes her five minutes to move 20 feet.

She heals quickly and her doctor is pleased with her progress, but her mental state isn't doing so well. She slips into depression. She is frustrated because she knows that she is supposed to appreciate all that her family and friends are doing to help her adapt to her situation, but she feels as if she is a stranger in her own house.

Learning to live without her leg isn't the only battle that Jessica faces. She also has to ward off medication dependancy. Her family tries to help her with this, but Jessica feels very abandoned and angry. Deep down, she knows her family is right.

Her best friend, Fiona, tries to pull her out of her depression by taking her out to lunch. As she showers, Jessica begins to see some benefits in her situation. She is happy she didn't lose an arm. Going back to school is difficult. The other students don't really know how to respond to her. They stare too much or pretend she doesn't exist. The entire track team has a party for her at lunch and it makes Jessica feel as if she fits in after all.

Her math teacher makes her sit next to Rosa, a girl with cerebral palsy. At first Jessica is hesitant to do this since she doesn't want to be linked with the handicapped, but she realizes this is wrong. When she gets to know Rosa through passed notes, she discovers that she likes the girl.

Whenever Jessica starts feeling better about her situation, something knocks her back down. She fits in all right at school, but she finds out that the insurance companies won't pay for her bills so her parents have to fight in court. Her father is putting in long hours at work to pay the bills.

Jessica gets fitted for a prosthesis and walks pretty well with it. Fiona and her coach tell her about a special running leg. Her team has decided to fundraise to get her one. She can't run, but she can still be part of this team, which is like a family. Jessica continues healing and the team works on raising money.

She gets her running leg and it feels like her life has been handed back to her. By this point, Jessica is good friends with Rosa, and she wants to share give her something special. She decides to train so she can race in the River Run - a ten-mile run. She will push Rosa in a wheelchair so Rosa can experience what it's like to cross a finish line.

The run is brutal but Jessica does it. As she crosses the line, she realizes that she can do anything. Her race is just beginning.

More summaries and resources for teaching or studying The Running Dream.