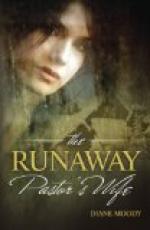 Diane Moody
This Study Guide consists of approximately 46 pages of chapter summaries, quotes, character analysis, themes, and more - everything you need to sharpen your knowledge of The Runaway Pastor's Wife.

The story begins with Annie Franklin and her boyfriend Michael Dean who have been dating for three and a half years. They are in love with each other, and imagine spending the rest of their lives together.

Then the story moves forward to 17 years in the future where a distraught Annie is on her way to her friend Christine's cabin in Colorado. She is unhappy with her husband, David McGregor, a pastor. He does not have time for her or their children, Max, Jeremy, and Jessie, because the church and its members consume his life.

Meanwhile, Michael is married to Amelia Thomas, the socialite daughter of Elliot Thomas, a billionaire and Congressman. Elliot found out that Michael wants to divorce his daughter and threatens to take away the business he helped Michael to establish.

In Colorado, Annie meets Bob and MJ at their store, along with Doc Wilkins. They are kind and helpful, but Annie keeps her guard up with them. At Christine's cabin, she cries out to God but does not feel peaceful so she decides to go for a walk. She accidently falls and twists her ankle. Doc comes up to the cabin to attend to her ankle and her wounded heart.

Michael contacts Grady, a trusted college friend, but hesitates to get him involved with incriminating information about Elliot. However, Michael tells Elliot about the information and Elliot surprisingly proceeds to shoot him twice. Michael cries out to God for help and is able to drive to Christine's cabin. Annie finds him in the snow and seeks help from Doc, who is able to keep Michael alive.

Max finds out where his mother called from and heads out to find her. Unfortunately, his borrowed van breaks down.

Michael opens up to Annie, but she remains guarded. Annie listens to God explain her purpose to lead Michael to Him. Michael accepts Christ and explains his abrupt breakup with her after college. He fathered a son with Christine, who gave him up for adoption.

Drama unfolds at the church as Chet tries to have David step down from his position. Brawling takes place just as Annie's mother Darlene and a TV crew burst into the church and start filming.

Max takes a ride with the Sheriff and meets Doc who takes him to see his surprised mother. Annie and Michael try to explain why they are there at the cabin together and that Michael is his birth father, but Max cannot handle it. He stomps out of the cabin and is grabbed by Elliot's men. Michael pleads with them to let him go, but Doc is the one who saves them by firing a rifle at their vehicle. Elliot and his men pursue as Michael, Annie, Max, and Doc head to the hidden old mine tunnel. They escape into a cavern, but Grady finds them. After getting angry and firing his gun, an avalanche carries off Elliot and his men. Annie points out that God provided another miracle by saving them. Max and Michael are able to catch up as Christine arrives at Williamson's store.

More summaries and resources for teaching or studying The Runaway Pastor's Wife.

The Runaway Pastor's Wife from Gale. ©2005-2006 Thomson Gale, a part of the Thomson Corporation. All rights reserved.