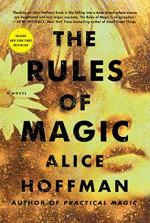 Alice Hoffman
This Study Guide consists of approximately 53 pages of chapter summaries, quotes, character analysis, themes, and more - everything you need to sharpen your knowledge of The Rules of Magic.

The Rules of Magic Summary & Study Guide includes comprehensive information and analysis to help you understand the book. This study guide contains the following sections:

This detailed literature summary also contains Quotes and a Free Quiz on The Rules of Magic by Alice Hoffman.

The following version of this book was used to create this study guide: Hoffman, Alice. The Rules of Magic, Simon & Schuster, 2017.

The novel opens a description of the three Owens siblings, Franny, Jet, and Vincent, and the magical history of their family. They grow up in New York City, attending the prestigious Starling School. At school, Franny grows close to a boy in her class, an activist son of rich parents, Haylin. All three siblings have what they refer to as the sight, or the ability to either see into the future and/or to know what others are thinking. The summer that Franny is 17, the siblings spent the season with their Aunt Isabelle in Massachusetts.

During that summer away from home, the children explore their abilities. They are joined in their aunt’s home by a distant cousin, April, who develops feelings for Vincent, like most women he meets. That summer, Vincent has sex for the first time with an older neighbor who becomes obsessed with him before he learns to magically break the obsession. Franny, who at first denies her magic, comes to accept what she is. Jet spends the summer inadvertently enchanting the local boys with her beauty and triggering the Owens family curse: that those who fall in love with an Owens are doomed to die. That summer the siblings attend several funerals of the boys who died trying to win Jet’s affections. Before they return home, she falls in love with Levi, the Reverend’s son.

On Samhain that same year, the sisters decide to test their powers and make a small wish. Jet wishes for her true love while Franny wishes to be among the birds she loves and gains a crow for a familiar because of it. Not long after, the family is visited by April, who is running away from home. She gives the siblings each a candle that can show them their true loves. When Franny burns hers, Haylin shows up at their town house. At this time, Jet begins a relationship with Levi, who often visits her in New York. She falls deeply in love with him. When Franny gets her acceptance letter from Radcliffe College, in Boston, Jet wishes that she will be unable to go and leave her. The next day, Haylin and Franny celebrate together before Franny receives a call from her younger brother’s favorite bar to come pick him up. When the siblings arrive home, they find several omens of an impending death.

On Jet’s birthday, she plans to spend the night with Levi in a hotel. She meets him, but her parents suspected and followed her. Due to the rain that night, they get into a terrible accident that leaves both Levi and the siblings’ parents dead and Jet in the hospital. They attend their parents’ burial in Massachusetts and stay with Isabelle for a while. Franny decides that she, as a legal adult, will be responsible for her siblings, and forsakes college. Jet remains in deep mourning for her parents and her lost love for so long after they return to New York. Franny learns quickly of the debt that her parents had and the family sells the townhome where they grew up, moving to a small house in Greenwich. Not long after, Haylin leaves for Harvard.

To make money, the sisters set up a shop in their house selling homemade magical potions, remedies, and beauty products. For months, Jet mourns. She eventually rents the hotel room where she was supposed to spend her birthday with Levi intending to commit suicide. Instead, a friendly bellhop stops her and they have sex, allowing Jet to begin moving on. On his 18th birthday, Vincent is drawn to a mysterious private club where he meets a man, William, who he instantly falls in love with. On New Year’s Day, Franny learns that Haylin is in the hospital for appendicitis and rushes to Boston to see him. There, she meets his girlfriend and leaves upset that he moved on with his life. In the spring, April visits the family, having run away from home to protect her young daughter, Regina, from being taken from her by her parents.

That summer, Vincent and William go to San Francisco during the Summer of Love, where William talks Vincent into performing at the Monterey Pop Festival. At the festival, the couple runs into April and Regina, who invite them back to their nearby home. While there, Vincent learns that Regina is his daughter, the result of a night spent with April when he was 14. The following March, Jet takes the bus to Massachusetts to visit Levi’s grave. On Franny’s birthday, three weeks later, she learns of Haylin’s engagement to his girlfriend. She crashes their engagement party, where they have sex. Jet begins to visit Massachusetts once a month, often running into Levi’s father, eventually striking up a tentative friendship.

One night, a year or so later, Franny gets a message from Isabelle. She goes to Massachusetts and cares for her aunt in her last week of life. Franny inherits the house. When the Vietnam War begins, Vincent gets drafted. When he goes for his fitness evaluation he is institutionalized after telling the doctor that he is homosexual and a wizard. Franny has Haylin help him escape the mental hospital and flee to Germany. Vincent ends up in France, where he meets a friend of his mother’s, who helps him fake his own death and start a new life. When Franny, Jet, and William go to Paris for the funeral, Vincent and William disappear to begin a new life in France.

During the war, Haylin loses a leg. When Franny goes to Europe to care for him, they decide to start a real relationship together. By this time, Franny and Jet live in their aunt’s old home in Massachusetts. Haylin joins them when he recovers. He eventually develops cancer, and then he and Franny get married. Weeks after his death, the sisters get a call from Regina’s children informing them that Regina and her husband have died. The sisters take in their great-nieces, Gillian and Sally Owens, to raise.

More summaries and resources for teaching or studying The Rules of Magic.

The Rules of Magic from BookRags. (c)2022 BookRags, Inc. All rights reserved.