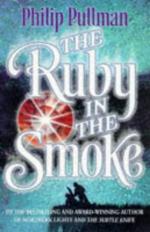 Plot Summary
+Chapters Summary and Analysis
Chapter 1: The Seven Blessings, and Chapter 2: The Web
Chapter 3: The Gentleman of Kent, and Chapter 4: The Mutiny
Chapter 5: The Ceremony of the Smoke, and Chapter 6: Messages
Chapter 7: The Consequences of Finance, and Chapter 8: The Passions of Art
Chapter 9: A Journey to Oxford, and Chapter 10: Madame Chang
Chapter 11: The Stereographic Repertory Company, and 12: Substitution
Chapter 13: Lights Below the Water, and Chapter 14: Arms and the Girl
Chapter 15: The Turk's Head, and Chapter 16: Protecting the Property
Chapter 17: King James's Stairs, and Chapter 18: London Bridge
Chapter 19: The East India Docks, and Chapter 20: The Clock Tower
Characters
Objects/Places
Themes
Style
Quotes
Topics for Discussion
Order our The Ruby in the Smoke Study Guide

The Ruby in the Smoke Summary & Study Guide

Philip Pullman
This Study Guide consists of approximately 73 pages of chapter summaries, quotes, character analysis, themes, and more - everything you need to sharpen your knowledge of The Ruby in the Smoke.

The Ruby in the Smoke Summary & Study Guide Description

The Ruby in the Smoke Summary & Study Guide includes comprehensive information and analysis to help you understand the book. This study guide contains the following sections:

This detailed literature summary also contains Topics for Discussion on The Ruby in the Smoke by Philip Pullman.

'The Ruby in the Smoke' is a mystery story set in Victorian London. Sally Lockhart's father has just died and she has received a mysterious letter telling her to seek out Marchbanks and to avoid 'The Seven Blessings.' Sally begins to investigate and is soon drawn into two dangerous mysteries, one revolving around a much-desired Ruby, and the other concerning her father's death. By the end of the story, with the help of new friends, she manages to solve both mysteries.

Sally goes to the offices of her late father's shipping firm, Selby and Lockhart. She has received a letter that warns her about the 'Seven Blessings.' She asks the company Secretary about this and he immediately dies of fright. A boy called Jim overhears this and decides to help Sally with her mystery. Sally returns to Mrs. Rees' house, a distant relative whom she has been living with since her father died.

Sally receives a letter from Major Marchbanks, asking her to come see him in Swaleness. However, when she arrives he tells her that a dangerous woman called Mrs. Holland is in his house. He gives Sally an important parcel to read and then tells her to get away quickly. She does so, but is followed by Mrs. Holland. She sees a photographer on the pier and he agrees to let her hide in his tent until Mrs. Holland has gone. Sally opens Marchbanks' parcel on the train home. It is his diary. She reads an entry about him serving in India and seeing the beautiful Ruby of Agrapur. She then falls asleep and while she is sleeping, a man steals the diary, leaving only a page with a riddle on it.

Meanwhile, a man called Matthew Bedwell arrives in London and stays at Mrs. Holland's lodgings. Mrs. Holland becomes interested in some information he has, so she keeps him drugged on opium to stop him from leaving. Bedwell tells Mrs. Hollands' servant Adelaide to contact Sally for him. Adelaide goes to Selby and Lockhart and talks to Jim, who passes the news on to Sally.

Mrs. Holland hires a man called Mr. Hopkins to rob Sally of the paper with the riddle on it. He steals the paper but is mugged and killed in the street afterwards. Sally is horrified and realizes that she has to move. She leaves Mrs. Rees and goes to her lawyer, where she draws out all the money from her account. She then seeks out the photographer from the beach, Frederick. He and his sister Rosa invite her to stay with them in return for her help with the business.

Frederick decides to help Sally with her mystery. They go to Oxford to find Bedwell's brother, who agrees to help them get Bedwell away from Mrs. Holland. Frederick takes Sally to an opium den to get some of the drug so they can wean Bedwell off it. Sally accidentally breathes in the smoke and sees a vision of her past.

Mrs. Holland, with a hired thug called Mr. Berry, tracks down the thief who mugged Mr. Hopkins, and retrieves the paper with the riddle. As she is doing this, Frederick and Reverend Bedwell break in to her lodgings and manage to escape with Matthew Bedwell and Adelaide.

Bedwell recovers and tells Sally the truth about her father's death. He was murdered by a criminal called Ah Ling, head of the Chinese Triad called The Seven Blessings. Sally decides it is time to get a gun to protect herself.

Mrs. Holland finally manages to solve the riddle. She goes to the pub in Swaleness where the Ruby is hidden, but it is gone. Someone has already found it. Mrs. Holland is furious, and she retaliates by kidnapping Adelaide. Jim and Frederick immediately go after her. Jim manages to escape with Adelaide, but is caught again at King James's Stairs. There he and Frederick fight Mr. Berry, eventually defeating him. However, Mrs. Holland has left with Adelaide.

Meanwhile, Sally decides to take opium again to see more visions of her past. She does so, and suddenly understands the importance of the Ruby. Rosa admits that Jim found the Ruby a while ago, but hid it to keep Sally safe. Rosa gives the Ruby to Sally. Sally arranges to meet Mrs. Holland at London Bridge, where Mrs. Holland explains that the Ruby was promised to her long before the Maharajah gave it to Lockhart. Lockhart then exchanged it for Marchbanks' baby. Sally is actually Marchbanks' daughter. Sally throws the Ruby into the river, but Mrs. Holland dives after it and drowns.

Just when Sally thinks it is all over, a coach draws up and a man called Van Eeden kidnaps her. He tells her that he is Ah Ling, the man who murdered her father for interfering in his illegal opium trade. He threatens Sally with a knife, but she shoots him and runs away.

Later, Sally receives a message to look in the clock tower at her old house. She finds ten thousand pounds that her father received for selling his share in Selby and Lockhart. She decides to put the money towards helping Frederick's business and finding the missing Adelaide.

More summaries and resources for teaching or studying The Ruby in the Smoke.

The Ruby in the Smoke from BookRags. (c)2022 BookRags, Inc. All rights reserved.