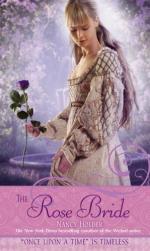 The Rose Bride: A Retelling of 'the White Bride and the Black Bride' (Once... Summary & Study Guide

Nancy Holder
This Study Guide consists of approximately 48 pages of chapter summaries, quotes, character analysis, themes, and more - everything you need to sharpen your knowledge of The Rose Bride.

The Rose Bride: A Retelling of 'the White Bride and the Black Bride' (Once... Summary & Study Guide Description

The Rose Bride: A Retelling of 'the White Bride and the Black Bride' (Once... Summary & Study Guide includes comprehensive information and analysis to help you understand the book. This study guide contains the following sections:

This detailed literature summary also contains Topics for Discussion on The Rose Bride: A Retelling of 'the White Bride and the Black Bride' (Once... by Nancy Holder.

"The Rose Bride" by Nancy Holder tells the story of two unrelated young people, sent on a journey to find true love by the goddess Artemis as the result of wishes made by their mothers. These two not only learn the meaning of true love but also find this love in one another. The fairy tale incorporates aspects such as black magic, gods and goddess, and an enchanted rose garden in a story that teaches the importance of rising above one's failures and ill fortune to be the best person they can. Themes include the maturation of true love and the struggle of good versus evil.

At the beginning of the novel, Jean-Marc and his new wife Lucienne have just learned they will have a son who will heal two broken hearts. The action then switches to the Marchands. Rose's mother, Celestine, plants a magical rose garden for her daughter in which she later makes her wish that Rose always know that she is loved. Celestine dies soon after that wish is made. Meanwhile, Rose's father has fallen into the hands of Ombrine and Desiree Severine. He dies of suspicious causes just before they reach the Marchand home, and the Severine women take over the house and treat Rose as a servant. As times become harder, Ombrine destroys the rose garden planted by Celestine, an act that breaks Rose's heart. Ombrine plans to use the plot to grow vegetables, a move that allows Rose to visit Elise's grave in the village. The purple roses, created by Rose's mother, are growing on Elise's grave. As she is tending the roses one day a man, who turns out to be her half-brother, offers to buy flowers from Rose. He paints a portrait of Rose which is later seen by the king who recognizes Rose because she looks just like his late wife Lucienne.

War is breaking out in the country as a man claiming to be Jean-Marc's half-brother tries to usurp him. It is in these conditions that Jean-Marc sends his adviser out to find the woman who looks so much like Lucienne. On the way back to the palace, the royal - is attacked. Rose is washed into a river and turned into a doe by Artemis. Ombrine and Desiree use a spell provided by the God of Shadows to make Desiree look like Rose. Jean-Marc marries Desiree at first sight. She and her mother, along with the God of Shadows and Mother Hecate, plan to kill Reigner, Rose's half-brother, and his wife. They also poison Jean-Marc to make him do what they want him to do. Jean-Marc, however, makes friends with Rose, the doe. When his wife and step-mother accuse the doe of betraying Jean-Marc, he hesitates to kill her because he does not believe she would hurt him. The statue of Artemis shoots Desiree in the chest. Blackbirds come and carry the mother and daughter away. Rose transforms from the doe back into her true form.

Although Jean-Marc wants to marry Rose because of her resemblance to his first wife, Rose will not agree to do so because she knows that he is unable of loving her as she deserves. It is at the point that Jean-Marc finally stops trying to make Rose love him and decides to be the man that she could love that she is able to disclose the love that she has had for him for so long. The two are married and celebrated as a couple who brings true love and prosperity to their land.

More summaries and resources for teaching or studying The Rose Bride: A Retelling of 'the White Bride and the Black Bride' (Once....

The Rose Bride: A Retelling of 'the White Bride and the Black Bride' (Once... from BookRags. (c)2022 BookRags, Inc. All rights reserved.