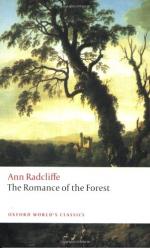 The Romance of the Forest Setting & Symbolism

Ann Radcliffe
This Study Guide consists of approximately 41 pages of chapter summaries, quotes, character analysis, themes, and more - everything you need to sharpen your knowledge of The Romance of the Forest.

A league is a unit of measurement consisting of about three miles.

Monville is the city where La Motte stops so that his family and Adeline may spend the night.

The Forest of Fontanville is the forest in which the abbey is located.

Lyons is the town in which La Motte hopes he will be able to seek concealment.

Auboine is the town close to the deserted abbey in which the La Mottes stay. It is from this town that Peter brings supplies and furniture.

It is on the banks of this river, which winds through the forest that surrounds the abbey, that Adeline often takes books to read.

St. Clair's Abbey is the abbey in which the La Mottes set up residence after they are forced to leave Paris.

Ruins of a Tomb

More summaries and resources for teaching or studying The Romance of the Forest.

The Romance of the Forest from BookRags. (c)2023 BookRags, Inc. All rights reserved.