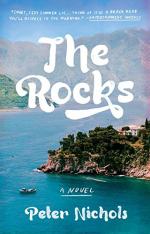 Get The Rocks from Amazon.com
View the Study Pack
Study Guide
Order our The Rocks Study Guide

Peter Nichols
This Study Guide consists of approximately 51 pages of chapter summaries, quotes, character analysis, themes, and more - everything you need to sharpen your knowledge of The Rocks.

The Rocks Summary & Study Guide includes comprehensive information and analysis to help you understand the book. This study guide contains the following sections:

This detailed literature summary also contains Quotes and a Free Quiz on The Rocks by Peter Nichols.

The following version of this book was used to create this study guide: Nichols, Peter. The Rocks. Heron Books, 2015.

The Rocks is a fictional novel taking place from the 1940s until 2005. The novel tells the story of three generations of people living on a small island off the western coast of Spain, and how the series of events in their lives define their relationships and behaviors.

Lulu and Gerald are at the forefront of the story that, with the exception of the first and final sections, is told going back in time. However, it begins with their death. Lulu and Gerald met by chance on the road and Gerald, as always, asked her to develop the film. Lulu, who by her ninth decade was still healthy except for the constant cursing resulting from a stroke. The two exchanged accusatory words and then grabbed one another, pushing and rolling, over the grass and off the cliff, to their death.

Lulu and Gerald met after World War II, and fell in love dramatically, quickly. But a tragic event on the shores off of Greece after they were married set the course for their lives moving forward. They divorced shortly after this life altering event. Though Gerald tried to explain and apologize for his absence after the trauma, Lulu was determined to have nothing to do with Gerald.

This planned proved impossible however, since both Gerald and Lulu settled on the island of Mallorca, Lulu running the inn at The Rocks, and Gerald, only a few miles away, lived on an olive grove he purchased. Though they saw one another only a few times for the remainder of their lives, their children’s lives were intertwined. In addition, Gerald brought up the mysterious role of film each time the two did meet, begging Lulu to develop it and reminding her that he "lured them away" (6). Lulu always ignored Gerald’s annoying reminders, determined not to revisit that day in any way.

Gerald’s daughter Aegina, and Lulu’s son Luc were friends since childhood. Luc realized at a young age that he loved Aegina, but every time he wanted to act on his feelings, either a misunderstanding or a missed opportunity kept it from happening. The first time this happened was when Aegina was stoned, mourning the loss of her mother. She was 14. She offered herself to Luc, claiming she was a virgin and wanting to know if he was, too. But Luc, recognizing this as taking advantage, told Aegina no. Had he said yes, even know it was wrong, Aegina might not have been raped by Dominick. As young adults, Luc accompanied Aegina to Morocco on a mission to buy cotton shirts at cost. There, he told Aegina how much he loved her, only to mess things up the next day by having sex with a tourist they met on their journey. It is this action that hurt Aegina to her core.

When Luc and Aegina were caught riding in a car smuggling drugs, Gerald and Lulu came to bail them out of prison. One of the few times the two had seen one another, their interaction remained cold, Lulu berating Gerald for being at the prison for a week and not successfully getting them out.

Luc and Aegina moved on in their lives. Aegina married a business man she never loved and Luc wrote screenplays for obscure movies. When Luc was aboard Szabo’s yacht, he almost drowned. Before that, he agreed to changing his beloved screenplay, giving up the themes of the story he felt represented his best writing. He fell into the water when he encountered Aegina’s husband having sex with a guest of Szabo’s. Many hours later, Luc was saved by the most unlikely of people, Lulu. Lulu, who never told Luc she loved him, was always critical of his lack of a wife or children and his marginal success in the movie industry, Lulu who vowed she would never set foot on a boat, hired a captain and searched until she found him.

When Gerald heard that the book he published long ago, charting and photographing the journey of Homer’s Odyssey, was considered for republishing, he was shocked. He thought nobody had ever heard of his book, and felt it to be irrelevant to most people. But Aegina convinced him to accept the offer. She accompanied him to London for the release party. There, Gerald became emotional while speaking, thinking back to the love of his life, and the tragedy that occurred in those very caves and waters his book showcased.

Toward the end of the story, both Aegina and Luc, independently of one another, took control of their lives. Aegina divorced Fergus, and focused more clearly on herself and her art. Luc enjoyed success on one of his screenplays, earning him a name in the movie industry, which he felt proud of, even at a later stage in his career. Both Luc and Aegina’s lives finally improved, with the implication of their relationship at the end. They never realized the implications of the role of film, but knew it involved each of their parents.

There are a variety of scenes towards the end of the novel that fill in the missing parts of each person’s story. A beautiful scene from Luc and Aegina’s childhood described them playing together in the waves. The innocent and playful laughter from both children as the water rolled over them was the last time their interconnectedness was uncomplicated. Finally, Lulu and Gerald’s death is reexamined. Gerald held Lulu in the water, just as he did when she fell off the rock cliff. He spoke to her in her unconsciousness, promising to keep her safe, the one thing she never asked of Gerald, which he failed to do until that moment.

More summaries and resources for teaching or studying The Rocks.

The Rocks from BookRags. (c)2022 BookRags, Inc. All rights reserved.