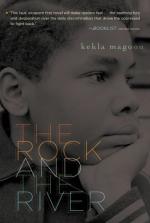 The Rock and the River Summary & Study Guide

The Rock and the River Summary & Study Guide Description

The Rock and the River Summary & Study Guide includes comprehensive information and analysis to help you understand the book. This study guide contains the following sections:

This detailed literature summary also contains Topics for Discussion on The Rock and the River by Kekla Magoon.

Sam Childs is the thirteen-year-old son of civil rights activist Roland Childs. Sam's mother, Marjorie, stands next to her husband as he leads crowds of demonstrators in the methods of Dr. Martin Luther King, Jr. Sam's older brother, Steven, is known as Stick to Sam. The boys are close and, during one large demonstration, plan to slip away from the crowd. Before they can make their escape, there's a fight and Stick steps in. He's hurt and Sam manages to get him to the hospital where their parents catch up with them. At home, Roland is furious that the boys put themselves in a position to be involved in a fight. The next morning, Dr. King's wife calls to check on them and Sam spends the day fielding questions from his classmates at school.

One day Stick's friend Bucky arrives at their house. He and his family have been kicked out of their apartment and Bucky sometimes sleeps at the Childs' house. One particular evening, Bucky has information about the Black Panthers. Sam soon discovers through his girlfriend that Stick is involved in the Black Panthers. Stick is soon working with the group, seeking to create a better life for those in the black community. One of the efforts is a feeding program that provides breakfast for the kids who would otherwise be hungry. Stick is also excited about plans for a free medical clinic.

Stick leaves home because of arguments with his parents but one day he slips back in and stashes a gun at the house. Sam is furious and hides the gun, then refuses to give it back to Stick. Sam is trying to figure out what to do with the gun one day just before a demonstration when his father enters the room. In an effort to hide the gun, he slips it into his waistband and winds up leaving the house like that. At the demonstration, a fight erupts and Stick becomes involved. Sam rushes to Stick's side and waves the gun in the face of Stick's attacker, forcing the man to let go. Stick and other members of the Black Panthers rush Sam away from the scene. Once in Leroy's car, the gun is put in the glove compartment.

Meanwhile, Stick's friend Bucky is jailed for running into a police officer. Sam witnesses the arrest which is brutal and decides to testify for Bucky. Bucky is released and Sam goes with Stick and Raheem to pick him up. They are in the car on the way back to the neighborhood when the police pull them over. Stick reaches into the glove compartment for the car's registration and the police, seeing the gun there, shoot and kill Stick then arrest the others. Sam's father comes to the police station and picks him up.

At the funeral, Raheem announces that he has the name and address of the officer who killed Stick. He and Sam leave the funeral, planning to avenge Stick's death. On the way, Sam sees the building that's been designated for the free clinic and realizes revenge isn't the way to honor his brother's memory. Sam, who has always been torn between his father's non-violence teachings and the idea that a more militant approach could be more effective, dedicates himself to the Black Panther Party.

The Rock and the River from BookRags. (c)2022 BookRags, Inc. All rights reserved.