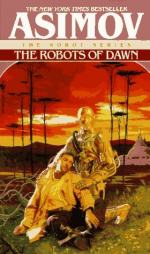 Isaac Asimov
This Study Guide consists of approximately 66 pages of chapter summaries, quotes, character analysis, themes, and more - everything you need to sharpen your knowledge of The Robots of Dawn.

The Robots of Dawn Summary & Study Guide includes comprehensive information and analysis to help you understand the book. This study guide contains the following sections:

This detailed literature summary also contains Topics for Discussion and a Free Quiz on The Robots of Dawn by Isaac Asimov.

The Robots of Dawn completes a trilogy of detective novels set a thousand years in the future in which an Earth police detective, Elijah Baley, works with a humaniform robot, R. Daneel Olivaw, to solve bizarre murders. Here they work on the planet Aurora and determine that a second humaniform robot, R. Jander Panell, has been killed to prevent Earth from being frozen out of Galactic colonization.

The Robots of Dawn by Isaac Asimov is a futuristic detective novel in which Earth plainclothesman Elijah Baley is recruited to investigate a murder on Aurora. The mission is politically touchy and likely to fail. His is happily reunited with a former partner, the humaniform R. Daneel Olivaw. They are joined by the primitive-looking but in fact telepathic robot, R. Giskard Reventlov. whose abilities are easily overlooked. Baley's intense fear of being Outside erupts throughout the mission, complicating his activities.

On Aurora, Baley deposes a series of people about how the humaniform robot R. Jander Panell's positronic brain might have failed permanently. The only person technically capable of the crime is his creator, who vehemently denies involvement. He insists that it is a chance occurance, despite the astronomical odds against it. Dr. Han Fastolfe, who has also summoned Baley to the planet, has powerful political enemies, who are pushing the Legislature to abort the investigation. Among the interviewees is Gladia, a woman whom Baley has defended on murder charges in an earlier novel. She is Jander's owner at the time of his demise and reluctantly admits to their being married (against taboo). Gladia's physical resemblance to Fastolfe's estranged daughter Vasilia complicates matters and suggests possible additional culprits, as Baley picks at straws.

After he interviews Fastolfe's rival, Dr. Amadiro, Baley is stranded in the woods in a sabotaged vehicle and comes to the realization that Daneel could be the key to Amadiro's learning the secret behind humaniform robots. Rescued, Baley enjoys sex with Gladia and while falling asleep utters the subconscious words that break the case. Gladia helps him remember. Baley testifies before the Chairman of the Legislature, suggesting that Amadiro has motive, opportunity, and means. Before returning to Earth, Baley and Gladia share a touching farewell, and Giskard reveals that he reads and influences minds. He has been subtly behind everything, and is convinced that Earth humans are capable of forming a Galactic Empire.

More summaries and resources for teaching or studying The Robots of Dawn.

The Robots of Dawn from BookRags. (c)2022 BookRags, Inc. All rights reserved.