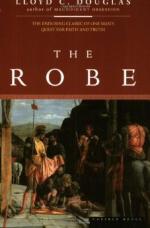 Get The Robe from Amazon.com
View the Study Pack
View the Lesson Plans
Study Guide
Order our The Robe Study Guide

Lloyd C. Douglas
This Study Guide consists of approximately 37 pages of chapter summaries, quotes, character analysis, themes, and more - everything you need to sharpen your knowledge of The Robe.

The Robe Summary & Study Guide includes comprehensive information and analysis to help you understand the book. This study guide contains the following sections:

This detailed literature summary also contains Topics for Discussion and a Free Quiz on The Robe by Lloyd C. Douglas.

Marcellus is the only son of Cornelius Gallio and her husband, a senator, and brother of Lucia. Lucia recounts the fact that her father spoke harshly against a local official, Gaius. Immediately after, Marcellus laughs openly at a long-winded ode to Gaius. Though Gaius is himself sleeping through the praise, Marcellus tells his sister that he's certain someone will inform him of Marcellus' action. That appears to be the case because Marcellus is soon sent to Minoa to command there. The region is far from Roman civilization and is known as the place for those who are exiled for one reason or another.

Marcellus goes with a contingent of his soldiers to Jerusalem for the annual Passover feast where their duties are primarily to be a military presence. However, Marcellus is then assigned the task of overseeing the crucifixion of Jesus. Marcellus is drunk at the insistence of his friend and fellow soldier, Paulus, who has seen crucifixions before. Despite this, Marcellus knows that Jesus is innocent of all crimes and Jesus' actions impress that on Marcellus. At the base of the cross, the soldiers - all very drunk - roll dice for Jesus' robe and Marcellus wins. At a dinner that night, he's goaded into putting it on and is immediately ill, unable to walk normally and plagued with depression and bouts of forgetfulness. His faithful servant Demetrius witnesses the entire episode, having already seen Jesus and become interested in His life. Demetrius returns home with Marcellus but the family agrees that he can't remain in Rome where his malady will be discussed. The two travel to Athens where Marcellus decides to takes his life. Searching for his dagger, he finds the robe and is immediately calmed and healed.

Over the coming months, Demetrius and Marcellus study the scrolls of an old Jew who is a weaver and who presents them with prophesies that seem to have come true with the life and death of Jesus. Demetrius is forced to flee for his life and returns to Jerusalem. Marcellus is assigned to go there to find information about Jesus for the Roman emperor. Marcellus and Demetrius soon reconnect and Demetrius proclaims his conversion to Christianity. Marcellus soon follows suit, learning from those who walked with Jesus and knew him best.

When Marcellus returns to Rome, his conversion is not accepted by either his family, his government or his intended wife, Diana. Forced to choose, Marcellus chooses Jesus and disappears for some period of time. Diana escapes an unwanted suitor - the emperor - and finds Marcellus. Marcellus is soon arrested for his proclamation of his Christianity and refuses to publicly recant Jesus, which earns him a death sentence. Diana, seeing the calm certainty of her husband, chooses to stand by his side and the two are led away to be executed.

More summaries and resources for teaching or studying The Robe.

The Robe from BookRags. (c)2022 BookRags, Inc. All rights reserved.