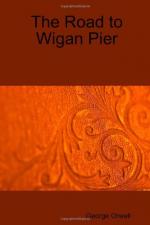 George Orwell
This Study Guide consists of approximately 38 pages of chapter summaries, quotes, character analysis, themes, and more - everything you need to sharpen your knowledge of The Road to Wigan Pier.

The Road to Wigan Pier Summary & Study Guide includes comprehensive information and analysis to help you understand the book. This study guide contains the following sections:

This detailed literature summary also contains Topics for Discussion and a Free Quiz on The Road to Wigan Pier by George Orwell.

Orwell, commissioned by the Left Book Club to write a book about unemployment in England, travels to Northern England and lives in a slum while he investigates unemployment and poverty among coal miners in Wigan, Sheffield, and surrounding areas. In Part I of the text he provides details about their lives and in Part II of the text he examines the idea that Socialism could provide a path out of mass unemployment and poverty. Alongside the assertion, Orwell provides a critique of Socialism and Socialists.

Orwell begins by describing his experiences living in a boardinghouse run by the Brooker family, a disagreeable situation which he declares to be entirely normal for the area. He then considers the life lived by most coal miners in Wigan and other coal centers. The discussion includes coal mining techniques and the economics of coal production. Orwell also notes the social situation of miners, including observations on personal hygiene, diet, and finances. Orwell also describes typical housing throughout much of Northern England and considers contemporaneous programs to build new housing. Orwell also observes the general physical degeneracy of Englishmen, noting their poor health and general malnourishment. He concludes Part I of the text by commenting upon the general aesthetic ugliness of industrialism. Part I of the text was generally well-received and was even republished without Part II.

Unlike the relatively straightforward preceding portion of the text, Part II of the book was controversial and involved much political theory. In the second portion of the book, Orwell presented his own interpretation of Socialism and offered a critique of Socialist practices then obtaining. The premises of Part II are essentially simple—that the appalling conditions described are not tenable; and that Socialism could improve the conditions. Why, then, asks Orwell, is Socialism not embraced by all? Orwell offers several possible answers to this question, including class prejudice, an irrational compulsion to venerate machinery, a failure of Socialists to concentrate on the real problems at hand, and the disparate ideologies traditionally lumped into Socialism. Orwell refers to many Socialists as 'cranks' because they hold various extraneous ideological beliefs that are entirely repudiated by the working class.

More summaries and resources for teaching or studying The Road to Wigan Pier.

The Road to Wigan Pier from BookRags. (c)2022 BookRags, Inc. All rights reserved.