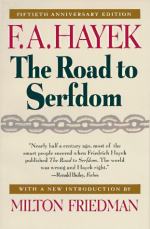 Plot Summary
+Chapters Summary and Analysis
Chapter 1, The Abandoned Road
Chapter 2, The Great Utopia
Chapter 3, Individualism and Collectivism
Chapter 4, The 'Inevitability' of Planning
Chapter 5, Planning and Democracy
Chapter 6, Planning and the Rule of Law
Chapter 7, Economic Control and Totalitarianism
Chapter 8, Who, Whom
Chapter 9, Security and Freedom
Chapter 10, Why the Worst Get on Top
Chapter 11, The End of Truth
Chapter 12, The Socialist Roots of Nazism
Chapter 13, The Totalitarians in our Midst
Chapter 14, Material, Conditions and Ideal Ends
Chapter 15, The Prospects of International Order
Chapter 16, Conclusion
Characters
Objects/Places
Themes
Style
Quotes
Topics for Discussion
Order our The Road to Serfdom Study Guide

Friedrich Hayek
This Study Guide consists of approximately 25 pages of chapter summaries, quotes, character analysis, themes, and more - everything you need to sharpen your knowledge of The Road to Serfdom.

The Road to Serfdom Summary & Study Guide includes comprehensive information and analysis to help you understand the book. This study guide contains the following sections:

This detailed literature summary also contains Topics for Discussion on The Road to Serfdom by Friedrich Hayek.

The Road to Serfdom by F. A. Hayek is a powerful analysis of how the use of economic planning leads to the evils of totalitarianism when economic planning replaces the markets. A democracy is based on individual freedoms. Individuals have the freedom to make their own choices and decisions. One of the choices and decisions regards the choice of occupation and employment. A market allocates resources, one of which is labor, to different uses in response to market conditions. This happens automatically through changes in wages and prices without direction from a commissar. The market results in an efficient use of resources with output production in accordance with the preferences of consumers.

Planning that takes the place of the markets robs the individual of this freedom of choice. The only way the planners can reallocate resources, including labor, is by the use of force. Therefore, one of the freedoms given up in the move to planning is the individual's freedom to choose his own occupation and employment. When the economy is won by groups of monopolies coalesced with their labor organizations, then there isn't equality. There is the privilege of one group over another. These are the corporate monopolies.

The only way to make it all work is by coercion and force. On an international basis, the groups become countries, and there becomes a dominant group or a country that rules over the subordinate groups or smaller countries by force. Central planning then means withholding certain resources; or, not authorizing the development of certain industries. How does it work? Individualism and personal values and morals in the population are destroyed by the state through the use of propaganda. The individual doesn't think or question. Those who do are dealt with by the use of force, like the Gulag. The less powerful groups, or the majority of the population, are subservient to a dominant group, of the ruling authority that controls the planning structure.

Hayek provides a brilliant insight as to how conditions developed in Germany that led to the years of Nazism. This condition did not develop overnight. It is a condition that began developing in the years following the First World War. It was in many ways a reaction to the laissez faire policies of the British, which is a point that keeps recurring throughout the book. Hayek analyzes the kind of person that is attracted to the rhetoric of this kind of a movement and how the movement takes over the values and essence of that kind of person. Hayek's analysis is on an intellectual level. There is a choice between two economic systems - markets or planning. Each has its shortcomings. One both functions on, and protects individual freedoms. The other can't function if there are individual freedoms, so it has to suppress individualism and replace individual thinking and values, if it is to survive.

For those who ask how it could have happened, Hayek's book explains how the mentality and conditions developed that led to socialism and fascism. It is a book full of insights into both systems.

More summaries and resources for teaching or studying The Road to Serfdom.

The Road to Serfdom from BookRags. (c)2022 BookRags, Inc. All rights reserved.