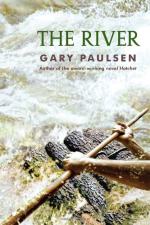 Get The River from Amazon.com
View the Study Pack
View the Lesson Plans
Study Guide
Order our The River Study Guide

Gary Paulsen
This Study Guide consists of approximately 18 pages of chapter summaries, quotes, character analysis, themes, and more - everything you need to sharpen your knowledge of The River.

The River Summary & Study Guide includes comprehensive information and analysis to help you understand the book. This study guide contains the following sections:

This detailed literature summary also contains Topics for Discussion and a Free Quiz on The River by Gary Paulsen.

The River by Gary Paulsen is the sequel to award winning novel, Hatchet. In this novel, Brian Robeson returns to the wild, but this time he goes to a new location with Derek Holtzer, a psychologist who works with a government program that teaches people to survive in situations similar to the one Brian experienced after a plane crash left him stranded in the wild. However, this trip is planned and seems too easy to Brian until a freak lightning storm turns the trip into a life or death struggle. The River is a fitting sequel to the Newberry Award winning novel Hatchet that will leave readers on the edge of their seats for a second time.

Derek Holtzer and two men from a government survival school come to Brian Robeson's house to ask him to do it again. Brian has just gotten past the notoriety earned when a plane crash left him stranded alone in the woods and now these people want him to do it again. Brian hesitates, but when he learns that the experience will be used to help others survive, Brian agrees. He only has to convince his parents.

Two weeks later, Brian boards another small aircraft, feeling a definite sense of déjà vu as he waves goodbye to his mother. Brian and Derek are going to an unnamed lake a hundred miles from the L-shaped lake where Brian's plane crashed. The idea is to survive the way Brian did, with nothing but the clothes on their backs and the items in their pockets. However, when Brian boards the plane he realizes that Derek has brought along a large assortment of survival gear. Upon landing, Brian insists that they send the gear back home with the plane. In a compromise, Derek agrees to only take the emergency radio and his briefcase filled with notebooks to take notes in.

On the first night, Brian and Derek endure the mosquitoes and cold because they could not find a flint to light a fire with. The next day, however, after a fall during an exploration of the area around the lake, they find not only a flint to start a fire, but a natural shelter created by a felled tree. Within three days, they have gathered enough food and firewood for weeks and created a comfortable shelter. With little left to do, Brian begins to worry that the entire episode has been too easy and Derek will never learn anything.

Late that night, Brian is awakened by the sound of distant thunder. Convinced a rainstorm will not reach them in their shelter, Brian goes back to sleep. When Brian wakes again, he hears thunder like he has never known. Brian immediately stands and moves further back in the shelter. Derek wakes as well, but he moves forward, reaching for the briefcase and radio. Suddenly lightning strikes a nearby tree and then Derek. Brian is hit to and wakes late the next morning to find Derek in a coma.

Brian does not know what to do for Derek. Brian tries to call for help, but the radio was fried by the lightning strike. Brian places Derek is a comfortable position and tries to feed him water, but it only causes Derek to choke. Afraid that Derek will die before anyone worries about them, Brian decides their only choice is to raft the river a hundred miles to a trading post.

Brian builds a raft and ties Derek to it. Within minutes they are on the river and riding the current toward help. However, the ride does not go as smoothly as Brian had hoped and he actually loses the raft for a time after he is thrown free while riding over some white water rafts. However, Brian eventually gets Derek to the trading post and help.

More summaries and resources for teaching or studying The River.

The River from BookRags. (c)2022 BookRags, Inc. All rights reserved.