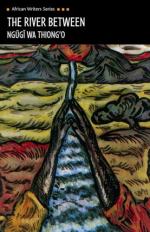 The River Between Summary & Study Guide

Ngũgĩ wa Thiong'o
This Study Guide consists of approximately 26 pages of chapter summaries, quotes, character analysis, themes, and more - everything you need to sharpen your knowledge of The River Between.

The River Between Summary & Study Guide includes comprehensive information and analysis to help you understand the book. This study guide contains the following sections:

This detailed literature summary also contains Topics for Discussion and a Free Quiz on The River Between by Ngũgĩ wa Thiong'o.

The River Between is the story of an African village and their quest to survive an influx of outside influence. The story opens with a description of the lore describing the area of two ridges, Kameno and Makuyu, and the river, Honia, that runs between them. The river is strong, even in the dry seasons, and the name means "cure." The legends of a magician, a seer and a warrior are ingrained in the children of the tribes that live there and those who live there are largely untouched by the outside.

Waiyaki is a special young man from the time of childhood. When he encounters two young boys fighting, he is able to put a stop to the fight though he is the youngest of the three. These three boys, Waiyaki, Kamau and Kinuthia are all destined to study at the Sierana Mission school and all will become teachers. Before Waiyaki is sent to the school by his father, Chege, father and son take a walk to a sacred grove where Chege reveals the fact that Waiyaki is destined to become the savior of their people. Waiyaki is skeptical that he could be that person, but advances to an important role in the development of his people. However, another member of the tribe who also knows the legend of a savior is Kabonyi. Kabonyi is jealous of Waiyaki's success with the people and wants that respected position for himself or his own son, Kamau.

Waiyaki comes to believe that education is the key to survival for his people and moves toward that end, establishing schools and coming to be a respected teacher among the tribe. Meanwhile, Waiyaki and Nyambura fall in love, though they remain apart because Joshua would never allow Nyambura to marry a pagan. Jealousy that Waiyaki is so beloved by the people and that he holds Nyambura's heart prompts Kamau to begin spreading rumors and Waiyaki is soon being accused of selling the tribe out to the white man's ways. As the story comes to a conclusion, Waiyaki realizes that unity of the tribe - not education - is the key to survival, and vows to encourage the tribe in that direction, but when he is brought in front of the members of the tribe, he can't hold their attention against those who speak against him.

More summaries and resources for teaching or studying The River Between.

The River Between from BookRags. (c)2022 BookRags, Inc. All rights reserved.