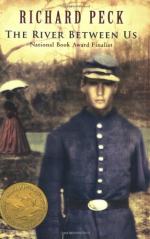 The River Between Us Summary & Study Guide

Richard Peck
This Study Guide consists of approximately 34 pages of chapter summaries, quotes, character analysis, themes, and more - everything you need to sharpen your knowledge of The River Between Us.

The River Between Us Summary & Study Guide Description

The River Between Us Summary & Study Guide includes comprehensive information and analysis to help you understand the book. This study guide contains the following sections:

This detailed literature summary also contains Topics for Discussion on The River Between Us by Richard Peck.

This novel for young people is set within the historical context of the American Civil War. It tells the story of the unlikely friendship that develops between two white teenage girls, the sophisticated, Southern Delphine and the farm-living, Northern Tilly. As the narrative explores the social, personal and physical repercussions of both the war and of the two girls' very different values, it also explores issues relating to racism, the necessity for transcending prejudice, and the relationship between past and present.

The novel begins with a prologue, set in the early 1900's, in which teenaged narrator Howard Hutchings describes his excitement at going on a car journey with his father and younger twin brothers to visit his grandparents. After a long, uncomfortable drive, Howard and his family arrive at the memory-filled home of Grandma Tilly, her husband Dr. Hutchings, the bedridden Delphine, and the war-wounded Uncle Noah.

The main body of the narrative consists of Grandma Tilly's story of how she and her family survived the American Civil War of the mid-1800's. At the time, the family consisted of fifteen year-old Tilly and her twin brother Noah, their Mama, and their younger sister Cass. Their father, referred to as Paw, had been gone for several years. One day, the family`s routine is disrupted by the arrival of a paddle boat from New Orleans. As Noah earns some extra money unloading cargo and luggage, Tilly watches the arrival of the beautiful, demanding, and evidently wealthy Delphine, accompanied by her black companion, Calinda. Delphine announces that she has been sent north by her family to protect her from the dangers of the war, and that she is looking for a place to stay. When one of the townspeople says the local hotel is not a fit place, Mama offers her home, and Delphine accepts, much to the fascination of Tilly and the nervous happiness of Noah, instantly infatuated with the vivacious Delphine.

Over the next several weeks, both Delphine and Calinda make themselves at home, the latter taking over the cooking and making friends with the shy Cass, the former making friends with Tilly. As both friendships become deeper, the war becomes more and more intense, and the townspeople come to suspect that Delphine is a spy for the south, suspicions that both Mama and Tilly confront and deny. Tensions come to a head in the aftermath of an appearance in the area by a touring showboat, at which Delphine dances with Noah, Tilly dances with the attractive Dr. Hutchings, and Calinda, much to the community`s shock, dances by herself. Shortly afterwards, Noah runs off to join the Northern army. Mama, having an intuition that he has fallen ill, sends Delphine and Tilly after him. Assisted by Dr. Hutchings, the two young women make their way to the military camp where Noah is being treated for dysentery, and help him recover. At the same time, Tilly discovers, much to her shock, that Delphine has African-American ancestry and is spending her life passing as white.

Once he is declared fit, Noah is sent back into combat, but almost immediately returns, having had one of his arms shot off. Delphine and Tilly help him recover, eventually taking him back to the farm, where they discover that the body of Paw has been sent back to them in a coffin, and Mama, thinking that the coffin contained Noah, threw herself in the river.

The narrative then returns to the present and the narrative voice of Howard Hutchings, who reveals that after he and his family left the farm, his father told him that Grandma Tilly and her husband were not his real parents, and that his real mother and father were Delphine and Noah. He also reveals his intention to go and fight in the impending World War I, and urges Howard to be as proud of his family and ancestry as he is. The novel concludes with young Howard`s affirmation that he is, in fact, proud of his family ... his entire family, everything they were and everything they are.

More summaries and resources for teaching or studying The River Between Us.

The River Between Us from BookRags. (c)2022 BookRags, Inc. All rights reserved.