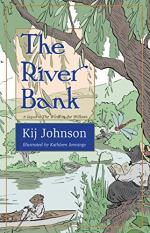 Kij Johnson
This Study Guide consists of approximately 36 pages of chapter summaries, quotes, character analysis, themes, and more - everything you need to sharpen your knowledge of The River Bank.

This detailed literature summary also contains Quotes and a Free Quiz on The River Bank by Kij Johnson.

The following edition of this book was used to create this study guide: Johnson, Kij. The River Bank. Small Beer Press, 2017.

The River Bank takes place in an alternate, almost fairy-tale dimension, where small woodland can creatures can talk, wear clothes, and have personalities and emotional lives almost completely like humans. One of the regions of this world is called River Bank, and two female friends -- a mole named Beryl and a rabbit named Lottie, who usually goes by Rabbit -- move into a house called Sunshine Cottage there. After thoroughly decorating their house, they are soon invited to a social tea by some of the local men: Water Rat, Mole, Badger, and Toad. While Water Rat, Mole, and Badger are incredibly casual, leisurely men, Toad is incredibly rich and pompous, and hosts the tea at his expansive mansion Toad Hall, which he inherited. At the tea, Toad deeply impressed Rabbit with his many tales of adventures and committing crimes -- some of the stories are true, and some are not.

As the summer progresses, Rabbit begins to visit Toad more and more often, to hear stories of adventure -- a habit that inadvertently pumps up Toad's ego. Just as Water Rat, Mole, and Badger decide that they must intervene in order to bring Toad back to earth, Toad and Rabbit get caught up in a sudden adventure. Toad, wanting to purchase a racing motorcycle, has been legally barred from purchasing a motorcycle by the local authorities, as a result of his previous crime of stealing cars. Under an alias, Toad visits a motorcycle dealership in Town under a thinly veiled alias. When he is allowed a motorcycle to test ride, he takes off on the motorcycle -- sweeping up Rabbit, who happened to be walking down that same street -- and throws the cash for the motorcycle in the air behind him as he takes off. This instigates a high-stakes police chase, with Toad nearly being caught in a dangerous pedestrian-packed square, before he evades the police and takes off through the countryside.

However, Toad quickly crashes the motorcycle, ruining it, and leaving him and Rabbit to try and find a place to stay while hiding from the authorities. Rabbit tries to lead Toad to her childhood home in the Hills, but she accidentally takes them to the wrong Hills. As they attempt to get on the right path, they are chased by an owl, and end up hiding in a barn. The barn turns out to be a clandestine meeting place for a gang of criminal weasels and stoats, led by a single cunning Fox. While they are initially impressed by the Toad's tales of criminality, Toad balks when he realizes that their latest robbery target is Toad Hall. The criminals then imprison Toad and Rabbit in a side room in the barn and scheme about how they can profit off the situation. Toad is incredibly emotionally distraught about the predicament, but the level-headed Rabbit gathers crucial information, and then furtively digs a hole that leads to the outside, and they plan their escape.

Meantime, the criminals send a ransom note back to River Bank, hoping to extort them for a slice of Toad's large fortune. Mole, who receives the note in the mail, reluctantly asks Beryl -- who is his older sister -- for advice, and the two siblings emotionally reconnect as they plot how to free their friends. They leave an explanatory note behind for Water Rat and Badger, and then go journey to try and find Toad and Rabbit. They arrive at the barn just as Rabbit has completed digging the hole to the outside. They sneak into the barn and, when the weasels and stoats hear the extra noise, engage the band of criminals in a vicious firefight before fleeing into the woods. There, they quickly run into Water Rat and Badger, who had departed River Bank shortly after Mole and Beryl, and as a gang they are easily able to defeat the weasels, stoats, and Fox. They tie up the gang of criminals and call in the police, so they can be brought off to jail, opening the possibility of a legal pardon for Toad after his past misdeeds. As the group journeys back home to River Bank, Toad asks for Rabbit's hand in marriage -- a proposal that she kindly turns down, citing that she does not want to have a husband at all. As the summer progresses, Toad agrees to stay out of trouble under the watchful eye of Badger, taking up coin collecting as a hobby. By the end of the summer, Beryl and Rabbit are fully integrated into the new neighborhood, with Beryl frequently going paddling with Water Rat or spending time with her brother, Mole.

More summaries and resources for teaching or studying The River Bank.