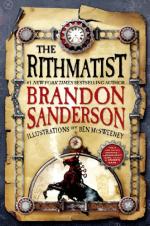 The Rithmatist Summary & Study Guide includes comprehensive information and analysis to help you understand the book. This study guide contains the following sections:

This detailed literature summary also contains Quotes and a Free Quiz on The Rithmatist by Brandon Sanderson.

The Rithmatist is the first novel in the Rithmatist Series by Brandon Sanderson. In this novel, Joel Saxon is fascinated with the Rithmatists, but he lost his chance to become one when his father was in an accident the day before he was to be incepted during the religious ceremony that determines which children will become a Rithmatist. Instead, Joel watches from the sidelines. However, when someone begins killing Rithmatist students, Joel finds himself in the middle of the investigation as both an investigator and a potential victim. The Rithmatist is an exciting beginning to a series that should prove to be a unique adventure.

Joel Saxon wanted to be a Rithmatist, but missed his chance when his inception was delayed. For this reason, Joel finds himself on the sidelines as he watches other students learn to become their nation’s protectors. Instead, Joel throws himself into the possibility of being a Rithmatist scholar. The principal, impressed with Joel’s determination, makes him an assistant to one of the professors who recently was out dueled and demoted to tutor.

The professor, Fitch, has been given an mysterious assignment by the professor to look for clues in the disappearance of several Rithmatist students. Joel is bored with his role in this investigation, but goes out of his way to prove to Fitch that he can be an invaluable service. At the same time, Joel finds himself drawn to Melody, a Rithmatist student who would rather be anything but. Joel and Melody do not get along at first, but their daily meetings in Fitch’s office draws them together. When Joel discovers that Melody has a unique way with chalklings, the small creatures Rithmatists draw to attack their opponents, he encourages her to keep working at her studies.

As Fitch continues to try to find information that could help the criminal investigation into the disappearance of a Rithmatist student, another student goes missing. When a third goes missing, Joel and Fitch travel to the scene of the crime to try and help interpret the drawings left behind by the criminal. While there, Melody shows up. Joel is the first to notice the unusual way in which Melody is able to control her chalklings when she uses one to spy on the crime scene.

Joel finally remembers where he saw one of the drawing the kidnapper left at the scenes of his crimes. Joel’s father, a chalk maker, studied Rithmatists closely and the symbol was among his things. Joel learns that his father thought there were other Rithmatist lines out there and he spent much of his life trying to find them. It appears that Joel’s father was successful, but was never able to make the line work because he did not know how it was supposed to work. Now, Joel knows that the line works to silence noises nearby.

A short time later, Melody suggests that Joel have another inception since his first one did not go as it should have. The night before Joel’s second inception, he is attacked by the same person who kidnapped the other Rithmatist students. Joel survives the attack, but a clerk in the principal’s office is arrested for the crime. Joel does not believe the clerk had anything to do with the attacks, but cannot convince anyone of this. The following day, Joel attends his inception and is disappointed when he is not chosen to become a Rithmatist.

That night, Joel and Melody are walking across campus when they see that the police officers who are supposed to be watching over the Rithmatist dorms have been knocked out. Joel sends Melody for help while he goes to investigate. Joel finds Professor Nalizar in the hallway. A second later, Inspector Harding, appears. The Inspector is different, clearly not himself. As Joel watches, Harding attacks Nalizar, knocking him out. Harding then turns his attention to the sleeping Rithmatist students, destroying them with wild chalklings.

Melody comes to Joel’s rescue, but they are trapped against Harding’s chalklings. Fitch appears and battles Harding. With Joel and Melody’s help, Fitch wins the duel. Harding suddenly collapses and the wild chalklings expand, releasing all the missing children, plus several others.

In the aftermath of Harding’s attacks, the principal decides to hold the Melee to encourage things to return to normal. As Joel arrives to watch the proceedings, he runs into Nalizar. In the course of their conversation, Joel becomes aware the Nalizar is not human, that, like Harding, he is possessed in some way by a Forgotten. Joel also realizes that Nalizar plans to make his own students succeed so that he can send a group of Rithmatists to the war that he can control. To prevent the first step of this, Joel helps Melody win the Melee.

The Rithmatist from BookRags. (c)2022 BookRags, Inc. All rights reserved.