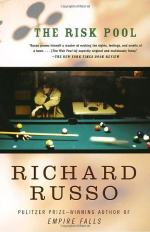 Richard Russo
This Study Guide consists of approximately 69 pages of chapter summaries, quotes, character analysis, themes, and more - everything you need to sharpen your knowledge of The Risk Pool.

This detailed literature summary also contains Topics for Discussion and a Free Quiz on The Risk Pool by Richard Russo.

The Risk Pool, by Richard Russo, is a coming of age novel narrated by the main character, Ned Hall. The story takes place in the small town of fictional Mohawk, New York, and it boasts rich, flawed characters and a wonderful combination of pokerfaced humor and moving moments. Richard Russo focuses on the roughness, the beauty, and the complexity of small town, working-class people.

The entire book is divided into four parts, which correspond to the four seasons of Mohawk (according to Ned's grandfather): Fourth of July, Mohawk Fair, Eat the Bird, and Winter. Winter is capitalized because it is by far the longest season in the town. Richard Russo reveals his excellent observations of real-life people through Ned's unique ability to see interesting details in every situation.

The story begins shortly before Ned's birth. Ned's parents, Sam and Jenny, have a tumultuous relationship. Sam has recently returned from World War II, and he wants to celebrate life. Jenny tries to go along, but when she becomes pregnant, she is ready to settle down and get to the business of real life. Sam abandons the family shortly after Ned's birth, but he returns later and tries to insert himself back into their lives at various times.

Ned Hall lives with his father for two short years after his mother has a nervous breakdown, and when she recovers, Ned moves back in with her for his high school years. Ned manages to grow up into a fine young man, in spite of being raised by two less than ideal parental figures. His father is a first-class drifter who is always stuck at the bottom of the auto insurance risk pool because of his bad driving habits. His mother develops severe psychological problems that keep her in hospitals and nursing homes for several years and addicted to Librium after she is released. Ned is also raised by a large number of minor characters in town who keep an eye on him, but not too closely.

The novel follows Ned Hall's life in chronological order, but it is also a cyclical story. It begins around the time of Ned's birth and the first few pages include a touching moment in the hospital when Ned is born. His mother looks beautiful and his father is in awe. The story ends with another beginning—the birth of Ned's son. Ned's girlfriend looks beautiful, and Ned is in awe when he sees his new son. The author uses almost exactly the same words to strengthen the idea of the circle of life.

Everyone in Mohawk is doing the best they can, in spite of living in a crumbling local economy and a sagging town. Most of the residents talk of money and luck as if it's something they will never have, but they willingly take the hand they've been dealt and shrug their shoulders at the craziness of life. The numerous characters in this novel are both hilarious and heartbreaking in their sincerity.

More summaries and resources for teaching or studying The Risk Pool.