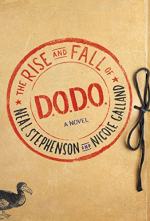 The Rise and Fall of DODO Summary & Study Guide

The Rise and Fall of DODO Summary & Study Guide Description

The Rise and Fall of DODO Summary & Study Guide includes comprehensive information and analysis to help you understand the book. This study guide contains the following sections:

This detailed literature summary also contains Quotes and a Free Quiz on The Rise and Fall of DODO by .

The following version of this book was used to create this study guide: Stephenson, Neal and Nicole Galland. The Rise and Fall of D.O.D.O. New York, William Morrow / Harper Collins, 2017. Hardcover.

Tristan Lyons recruits Harvard Linguistics lecturer Melisande Stokes to translate secretive documents for DODO, his shadowy government organization. They pertain to the decline of magic due to the rise of scientific certainty. Witches were once able to access different quantum realities and influence outcomes, but science—particularly photography—limits the possibilities. Tristan and Mel stumble across the work of theoretical physicist Dr. Oda. They visit his home, where he shows them his model ODEC, a machine to enable quantum uncertainty, and therefore magic. Oda and his wife Rebecca join DODO.

Mel receives mysterious Facebook messages from an old Hungarian witch named Erszebet who claims she met Mel in the nineteenth century and extended her life in order to meet again in the twenty-first. When Erszebet enters the new ODEC, she proves her claim by magically restoring her youth. Tristan tests Erszebet with small tasks, but his bosses are unimpressed: Erszebet refuses to produce wealth or weapons. The arrogant General Schneider visits. Erszebet goads him to entering the ODEC and Sends him by magic to a 1564 Hungarian village, where he is burned by a mob. The military is unexpectedly pleased with this display. DODO now focuses on time travel, reporting directly to General Frink, the Director of National Intelligence.

First DODO must secure funding by Sending Mel back to 1640 Cambridge to bury a valuable book, which they will then recover and sell. Mel is successful but the book does not materialize. Erszebet explains that there are many Strands and several must be altered to reliably change history. Mel performs the mission eight more times, each with slight differences, but on the last iteration a factory covers the burial site and she is unable to complete her task.

Tristan travels to 1601 London, England, to stop investor Sir Edward from funding the factory. There he meets the undercover witch Gráinne. On several Strands Tristan finds Sir Edward and convinces him to invest elsewhere. A mysterious German banker named Athanasius Fugger accompanies Sir Edward and saves Tristan from injury. However, the factory remains. Gráinne and her witch friend Rose offer more help if Tristan will tell them the truth about DODO’s goals.

General Frink sends Lester Holgate to push for a more aggressive approach. Lester forces Erszebet to Send him to 1601 London too, blackmailing her by stealing her magical calculation device, her számológép. Lester recruits Gráinne to have the local constable catch Sir Edward in the brothel, then offer an escape route if Sir Edward will withdraw investment from the factory.

However, Sir Edward sleeps with a man, a crime in Elizabethan England. The man is Christopher Marlowe, the famous and supposedly dead playwright who had secretly been Gráinne’s lover. Tristan tries to keep the peace, but the struggle reveals Marlowe to the public. The Strand becomes too different from the rest and causes Diachronic Shear: the brothel explodes, reality distorts, and many die, including Marlowe and Lester. Athanasius Fugger helps Gráinne away and warns Tristan to learn from this mistake.

The factory finally moves and DODO auctions off the book; the buyer is Frederick Fugger. Oda reveals his new project: an electronic replacement for Erszebet’s számológép called the Chronotron, which will allow precise calculation of historical change across the Strands.

Mortimer heads DODO’s IT department, and Macy Stoll its burgeoning bureaucracy. Blevins and Frink determine that DODO’s first major goal will involve hundreds of small missions during the Fourth Crusade in 1203 Constantinople, aiming to shift borders in Eastern Europe to prevent Russian hegemony in the Balkans and avoid close Sino-Russian ties. DODO also needs the herb kalonji with which to bribe a sixteenth-century witch, and 1203 Constantinople has it. New recruit Chira acquires the kalonji from the palace apothecary on multiple Strands, and seeks out the teenaged witch Rachel in Constantinople’s Jewish district, Pera. Once Chira is safely Homed to the twenty-first century, operative Felix Dorn treks it overland to Antwerp.

Tristan must speak Norman to insert himself with the Varangian Guard and blend in in 1203 Constantinople. The local witch of the 1045 Norman village of Collinet agrees to host Tristan—posing as Tristan of Dintagel—as he learns the language. On Tristan’s fourth trip, he defends the local church from robbers in a comical fight.

Gráinne decides to insinuate herself into DODO, then circumvent it by preventing magic’s end entirely. Meanwhile, DODO prepares for its history-altering missions in Constantinople when Rachel, the young witch from Pera, interrupts the launch ceremony of several new ODECs. Curious about the future, she has had her mother Send her to join DODO. Blevins and Frink pretend to have planned her arrival as the first of many new witches. Over the next two years, Erszebet oversees the new witches and also teaches Rebecca and local waitress Julie Lee magic.

In Constantinople, Tristan meets Magnus of Normandy. Magnus takes Tristan to dinner and quizzes him about his supposed Norman origins. He points out that in a local church, there is a stained glass window of a St. Tristan of Dintagel defending a church. After Tristan reports the incident, Mel and her team of historians research St. Tristan and find that Tristan is canonized on several Strands; Wikipedia now acknowledges him.

Rachel researches the fate of Pera, her family’s neighborhood, and travels back to warn them. Meanwhile, Tristan fights in the climactic battle of the Fourth Crusade and completes his DODO mission. The battle does not match history, however, because Rachel’s arrival triggers Diachronic Shear in Pera. Despite the tragedy, DODO does effect its intended historical change.

Magnus believes he has met the centuries-old St. Tristan, and once he returns to Normandy he obsessively pursues the clues. After Magnus threatens a witch, DODO brings him forward to contain the threat of exposure. Gráinne arrives as well, unannounced and unplanned, to pursue her manipulative plans. In medical quarantine, she and Magnus form an alliance.

Blevins and Frink assign Oda to develop portable ODECs, called ATTOs, for more aggressive missions, especially mind control. Blevins shows Magnus football and Walmart to impress him. Erszebet aligns herself with Gráinne and explains the role of science and photography in the end of magic. She Sends Gráinne across time to recruit the Fuggers. At the DODO Halloween party, Frink and Blevins enter an ATTO with Gráinne and Erszebet for a long demonstration.

All of her time with Blevins in the ATTO gives Gráinne mental control of him. Macy tries to warn Blevins but he fires her. Three days later, Magnus escapes DODO supervision to visit the local Walmart. After security detains him, he threatens a witch into Sending him to Viking stronghold 912 Svelvik. From there, he travels time recruiting heroes for a raid on the Walmart.

Mel gets a new assignment for 1850 San Francisco. Its proximity to magic’s end worries her, and Gráinne offers to come along. Mel expects they will recruit the witch Xiu Li, but instead Gráinne has a local Fugger make Xiu Li and her descendants wealthy and powerful allies. Instead of homing Mel, Gráinne sends her to 1851 London, only weeks before the end of magic.

Erszebet is supposed to Send Tristan back to the Ice Age, but instead warns him about Gráinne. They defect and run to the Odas. Mortimer downloads as much DODO data as possible before joining them. Meanwhile, Magnus and his warriors hijack an ATTO, drive it into the Walmart’s storefront, and wage battle. Over the following night, Magnus and his warriors download maps of New World treasure sites. They return to the tenth century equipped to attack the Americas.

The renegades, joined by Julie and Felix, try to build an ODEC but the Fuggers block their only source of superconductors. The Walmart ATTO and DODO security head Major Sloane disappear. Julie finds the Major a week later, muddled from the effects of mind control. The two track the ATTO to a shipping container owned by the Fuggers and bound for Le Havre. Tristan and Felix helicopter in to paint a new serial number on the ATTO, re-routing it. Gráinne moves a second ATTO to the English Channel, and Magnus and his Vikings emerge to chase ATTO #1.

In 1851 London, Mel meets the young Erszebet. She tries to bring about Erszebet’s extended life, but Erszebet refuses. Over the following days, Erszebet’s mother pressures her to agree for the good of magic. Mel loses hope, but finds planted instructions from Mortimer. She travels to a town near Le Havre, finds a local witch, and travels forward into the waiting ATTO. One hour before magic ends, Erszebet’s mother performs the spell without Erszebet’s consent.

Mel successfully arrives in the ATTO, where Tristan and Felix are fighting Thord, one of Magnus’s warriors. He recognizes a gun and stands down. That night, Tristan and Mel confront their long-standing feelings for each other and sleep together. In the morning, Frederick Fugger takes back the ATTO, Homes Thord, and declares the Fuggers’ support.

The Rise and Fall of DODO from BookRags. (c)2022 BookRags, Inc. All rights reserved.