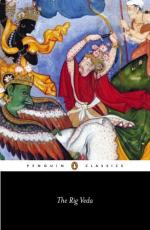 Anonymity
This Study Guide consists of approximately 32 pages of chapter summaries, quotes, character analysis, themes, and more - everything you need to sharpen your knowledge of The Rig Veda.

This detailed literature summary also contains Topics for Discussion and a Free Quiz on The Rig Veda by Anonymity.

The Rig Veda is one of the world's classical pieces of literature. It is part of the tradition of preserving ancient texts for a few reasons. One purpose for doing so, is in order to connect people with the origins of knowledge, religion and culture. Another reason for this is to empower the vision and sense of humanity as a whole, not only throughout the world but also for all time by preserving our connection with the generations who have come before and after us. Those who read The Rig Veda have rather direct access, through a translation from the Sanskrit, of life for the earliest Hindus approximately 3000 years ago. The date of origin has been 'estimated' as having fallen within a 300 year 'window' of 1200 BC or as recently as 900 BC. As additional reference points, this also falls within the Hebrew and Chinese and Mayan calendars. The Rig Veda begins with the very beginnings of religious philosophy typically referred to as metaphysics and ontology. Through the sequence of preserved pieces, the early development of Hindu theology is revealed and shared. To some extent it is even explained.

The form of the writings that comprise The Rig Veda are called 'hymns' by the scholars who have assembled or preserved these works. They are not structured into a recognizable poetic form of the modern English speaking world when presented in translation. They also do not have any standard lyrical form that would be customarily used in English. Having not seen the originals and due to not being a Sanskrit or Hindu scholar, the summary writer is not able to provide any authoritative insight into the nature of the forms in their language of origin in relation to those available to people of that culture. As such, given the frequent religious connotations of the works, it is presumed that the scholars have selected the term 'hymn' as the most accurate description available. On the rare chance that any reader does not know, a hymn is a religious lyric.

The Rig Veda covers a lengthy time span. There are a small number of references to "the poet" that come up during the course of the writings, but there is no author ever named or given any 'byline'. Without extensive research there is no precise way to interpret what this means. The Anonymous designation is accurate. Whether there was one author or more is not clear from the body of works themselves.

Essential principles of theological belief, and attitude towards that which is revered is the main discernible purpose of the messages delivered through The Rig Veda. Readers can take these in a variety of ways. There is both timelessness about it as well as 'timeliness'. The latter will greatly please history buffs. There is evidence to support the notion of 'progress' in human culture since then, when at least some of the contents are seen as 'backwards.' At the same time there are accuracies contained within the work. Early on, readers will read about the impact of thunder and lightning upon the human psyche. This has changed only very slightly or not at all during the thousands of years that followed. The week before this summary was physically formed, the writer observed grown women and men as well as children working through their instinctive and intuitive reactions to the mighty crackles, the blinding, flashing light and "the boom boom" of a storm. However primal or cultural, this is but one of the facts of life on earth that is captured by the unnamed authors of The Rig Veda.

More summaries and resources for teaching or studying The Rig Veda.