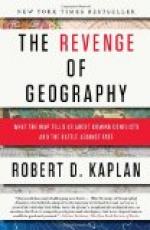 The Revenge of Geography: What the Map Tells Us About Coming Conflicts and the Battle Against Fate Summary & Study Guide

Robert D. Kaplan
This Study Guide consists of approximately 26 pages of chapter summaries, quotes, character analysis, themes, and more - everything you need to sharpen your knowledge of The Revenge of Geography: What the Map Tells Us About Coming Conflicts and the Battle Against Fate.

The Revenge of Geography: What the Map Tells Us About Coming Conflicts and the Battle Against Fate Summary & Study Guide Description

The Revenge of Geography: What the Map Tells Us About Coming Conflicts and the Battle Against Fate Summary & Study Guide includes comprehensive information and analysis to help you understand the book. This study guide contains the following sections:

This detailed literature summary also contains Topics for Discussion on The Revenge of Geography: What the Map Tells Us About Coming Conflicts and the Battle Against Fate by Robert D. Kaplan.

Robert Kaplan, a prominent neoconservative foreign policy intellectual, wrote The Revenge of Geography in order to draw the focus of the American foreign policy community back towards the recognition of the relationship between geography and politics, a focus that has remained unpopular since the early part of the 20th century. Kaplan in particular seeks to revive a variety of geographical intellectuals who he believes offered a number of critical insights about the interplay between geography and political, military and economic power across the world.

The basic idea is to argue that geographical factors play a major role in determining long-term political outcomes without buying wholesale into geographical determinism, which holds that long-term political outcomes are determined by geographical factors alone. Kaplan focuses in particular on the center of "Eurasia" in the Middle East, the Balkans and Eastern Europe, as holding the most potential for global political power. The region's geography ensures that it will remain disputed territory and that any nation that wishes to control the world must control this "heartland." Another important geographical factor is access to warm water ports, a deficit in Russian politics that leads Russia to act aggressively.

Perhaps the most important geographical claim that Kaplan advances is that the world will increasingly suffer from a "crisis of room." Due to rising population and the concentration of persons in large urban centers, the potential for conflict between nations increases. Higher populations will have more to fight over and less to agree on when it comes to the control of natural resources, strategic military points and simple, arable land. Kaplan also notes important features of U.S. geography, protected from invasion by two oceans, plush with arable land, natural resources and ports, and accordingly rich enough to dominate the globe. Its primary weakness is its southern border with Mexico, since the boundary is artificial and the influence of Mexican culture and immigrants will prove impossible to resist.

The Revenge of Geography is divided into three parts. In Part I, Visionaries, Kaplan rediscovers important early 20th century and late 19th century geopolitical intellectuals, including Nicholas Spykman and Halford MacKinder. These intellectuals can help the foreign policy community to focus on geography once again. Kaplan spends a good bit of time trying to separate their insights from what often prove to be unsavory political views of the day. Part II outlines the early 21st century map of the globe, covering divisions and conflicts in Europe, Russia, China, India, Iran and Turkey. Finally, in Part III, Kaplan discusses America's destiny as determined partly by geography. He predicts that in one hundred years the United States will have partly merged with Canada and Mexico and have a much more Hispanic racial and cultural cast. However, the US's friendly economic environment and intellectual communities will remain world class, as will its military power.

An important and not to be overlooked feature of the book is that it was written in part because Kaplan realizes that the 2003 War in Iraq occurred partly at his insistence and he now believes it to have been a complete disaster. The Revenge of Geography is supposed to help explain why it was a disaster and how the US can maintain global dominance by paying attention to long-term geographical factors that would have dissuaded it from invading Iraq in the first place.

More summaries and resources for teaching or studying The Revenge of Geography: What the Map Tells Us About Coming Conflicts and the Battle Against Fate.

The Revenge of Geography: What the Map Tells Us About Coming Conflicts and the Battle Against Fate from Gale. ©2005-2006 Thomson Gale, a part of the Thomson Corporation. All rights reserved.