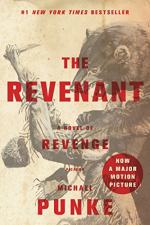 The Revenant Summary & Study Guide includes comprehensive information and analysis to help you understand the book. This study guide contains the following sections:

This detailed literature summary also contains Quotes and a Free Quiz on The Revenant by Michael Punke.

The Revenant: A Novel of Revenge is a historical fiction novel written by Michael Punke. The story takes place along the Missouri River in 1823. The trappers of the Rocky Mountain Fur Company are traveling upwards, on their initial path to Fort Union. One man in this party, Hugh Glass, is ferociously attacked by a mother bear, leaving his body slaughtered and on the brink of death. Everyone in the group, including Glass, believes that it's only a matter of time before the inevitable happens. When Captain Henry orders two men to stay behind and keep watch on Glass until his death, Fitzgerald and Bridger volunteer.

The men are meant to stay behind and bury Glass after he has died, and in return, they will receive $70. On the third day, Fitzgerald, fed up with being so far behind the rest of the group, abandons Glass, and takes his precious rifle and knife, leaving him with nothing to protect himself. Bridger initially protests his actions, but eventually runs away from Glass to catch up with Fitzgerald.

The Revenant is filled with fascinating and true historical details. The definition of a "revenant," from the title of the book, is a person who returns, supposedly from the dead. The basic premise the readers follow is Glass's will to not only survive, but get revenge on those who wronged him. Somewhere within him, He proves himself indestructible when he finds the strength to crawl 200 miles in pursuit of finding those who abandoned him and stole his belongings. This is a story of obsessive retribution and heroism.

The Revenant from BookRags. (c)2022 BookRags, Inc. All rights reserved.