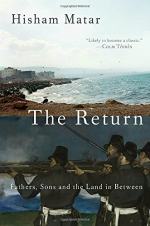 Summary
+Chapters Summary and Analysis
Trapdoor
Black Suit
The Sea
The Land
Blo'thaah
Poems
Your Health? Your Family?
The Truce and the Clementine
The Old Man and His Son
The Flag
The Last Light
Benghazi
Another Life
The Bullet
Maximilian
The Campaign
The Dictator's Son
The Good Manners of Vultures
The Speech
Years
The Bones
The Patio
Important People
Objects/Places
Themes
Styles
Quotes
Topics for Discussion
Order our The Return: Fathers, Sons and the Land in Between Study Guide

The Return: Fathers, Sons and the Land in Between Summary & Study Guide

Hisham Matar
This Study Guide consists of approximately 68 pages of chapter summaries, quotes, character analysis, themes, and more - everything you need to sharpen your knowledge of The Return.

The Return: Fathers, Sons and the Land in Between Summary & Study Guide Description

The Return: Fathers, Sons and the Land in Between Summary & Study Guide includes comprehensive information and analysis to help you understand the book. This study guide contains the following sections:

This detailed literature summary also contains Topics for Discussion on The Return: Fathers, Sons and the Land in Between by Hisham Matar.

The Return documents Hisham Matar's 2012 journey to his home country of Libya after living for over thirty years in exile. The oppressive reign of Muammar Qaddafi prompted a powerful resistance in which Matar's father was heavily involved, resulting in his family's exile at the young age of eight. While living in supposed safety in Egypt in 1990, Matar's father was kidnapped by Egyptian authorities and handed over to the Libyan government. Aside from three letters he managed to get outside of the prison walls, the last of which arriving in 1996, Jaballa Matar was never seen or heard from by his family again. Returning to Libya, Hisham Matar hoped that by being closer to the source, he could finally learn the fate of his father.

Matar documents his return in the form of a journal entry, allowing the reader access not only to the facts of his return but also the memories, opinions, and questions he interjects along the way. He explains his childhood in pieces throughout the book, only as prompted to by conversations with family members, familiar sights, or relevant stories. Matar was born in New York, lived in Tripoli until he was eight, took exile in Cairo, and attended boarding school in London, where he would eventually settle. What remained constant throughout Matar's upbringing was his father's active involvement in the resistance, which led to his kidnapping and imprisonment when Matar was nineteen. Hundreds of letters, trips around the world speaking to ex-prisoners, and an exhaustive public campaign for information came up short, as Matar returned to Libya in 2012 for the first time in thirty-three years with the same host of unanswered questions.

Matar's return to Libya centered around visits with family members, primarily in Benghazi and in his ancestral home of Ajdabiya. Uncles Mahmoud and Hmad, who each suffered a twenty-one year incarceration in Abu Salim prison, were some of Matar's most memorable relations. Their stories prompt Matar to reflect on memories of other family members such as his younger cousin Izzo, who died at age twenty-three fighting for the revolution.The tragic stories of seemingly all Matar's family members is a testament to the human cost of Libya's long-standing history of conflict. A dysfunctional colonial monarch deposed by a revolutionary-turned-dictator who held an iron grip over the country for forty years left Libya as it is today, in a disorganized and violent state of unrest. Generations of Libyans have felt a plight similar to Matar's and his family's, in that their whole lives have been defined by conflict.

More summaries and resources for teaching or studying The Return: Fathers, Sons and the Land in Between.

The Return: Fathers, Sons and the Land in Between from BookRags. (c)2022 BookRags, Inc. All rights reserved.