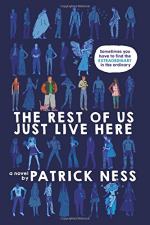 The Rest of Us Just Live Here Summary & Study Guide

Patrick Ness
This Study Guide consists of approximately 39 pages of chapter summaries, quotes, character analysis, themes, and more - everything you need to sharpen your knowledge of The Rest of Us Just Live Here.

The Rest of Us Just Live Here Summary & Study Guide includes comprehensive information and analysis to help you understand the book. This study guide contains the following sections:

This detailed literature summary also contains Quotes and a Free Quiz on The Rest of Us Just Live Here by Patrick Ness.

NOTE: Citations in this study guide refer to the 2015 Harper Teen hardcover edition of The Rest of Us Just Live Here by Patrick Ness.

The Rest of Us Just Live Here is a young adult fantasy novel by Patrick Ness in which Mikey and his ordinary friends attempt to live as ordinarily as possible in extraordinary times, as the indie kids at school seek to prevent an Immortal invasion. Mikey struggles through the course of the novel with accepting that he is just an average kid, but comes to realize that his life is important and full because of the friends he has.

When the novel begins, high school senior Mikey is in love with Henna, his sister Mel’s best friend. Mikey himself is best friends with Jared, a gay linebacker for the school football team, who is himself part god and has the power to attract and heal cats and people. Mikey is envious that Henna seems to have a crush on a mysterious new kid named Nathan, who appears to have formerly been an indie kid. While out with Mel, Henna, and Jared in their usual hangout place, the Field, Mikey sees an indie kid being chased into the woods by a smaller kid, after which a strange blue light can be seen.

In chapter prefaces through the novel, a background story is explained where the indie kids are always the ones to fight zombies, vampires, ghosts, and in this case, the blue-glowing Immortal invasion of Earth that is pending. A very light sketch of these events serves as a backdrop for the ordinary lives of Mikey and his friends as they struggle not only to survive the Immortal invasion, but to get through Finals, prom, and graduation. Mikey comes to feel badly about his own life because he has not done anything extraordinary and because he does not seem to have anything in his life–whether it is the powers of a god or love–to make his life worth living.

Mikey comes to suspect that Nathan has something to do with the Immortal invasion, but then admits to Jared his suspicions are primarily rooted in jealousy. Jared, despite his own powers, admits that indie kids annoy him because they think they are cool, superior, and that what they do does not affect anyone else–yet, the regular kids and people in town still have to deal with the effects of the Immortal invasion. Mikey and Henna kiss and sleep together to see what will happen, but then they both realize there is nothing romantic between them besides the sex. They choose to remain friends at the end of the day.

As this happens, the indie kids commit to their last confrontation with the Immortals. Mikey comes upon an injured indie kid just before graduation, whom Jared heals and allows to return to the fight. This inadvertently leads to saving the day–and Mikey has made his simple contribution to saving the world. It turns out that Jared and Nathan are actually attracted to one other, and Mikey now knows that his life matters because he has people who care about him in it.

More summaries and resources for teaching or studying The Rest of Us Just Live Here.

The Rest of Us Just Live Here from BookRags. (c)2022 BookRags, Inc. All rights reserved.