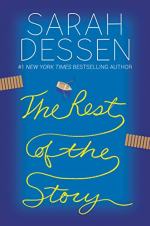 The Rest of the Story Summary & Study Guide

Sarah Dessen
This Study Guide consists of approximately 58 pages of chapter summaries, quotes, character analysis, themes, and more - everything you need to sharpen your knowledge of The Rest of the Story.

The Rest of the Story Summary & Study Guide Description

The Rest of the Story Summary & Study Guide includes comprehensive information and analysis to help you understand the book. This study guide contains the following sections:

This detailed literature summary also contains Quotes and a Free Quiz on The Rest of the Story by Sarah Dessen.

The following version of this book was used to create this study guide: Dessen, Sarah. The Rest of the Story. New York: HarperCollins Publishers, 2019.

Emma’s father and mother divorced when she was a young child. Her mother died from a drug overdose when she was ten years old. She spent time with her mother after the divorce even though he mother spent time in and out of rehabilitation centers. Emma also remembers that her mother was always tired, especially after drinking, when she was young and a story her mother used to tell her about a girl who lived near a lake.

After the divorce, Emma and her father lived with Emma’s paternal grandmother, Nana. At the start of the narrative this is about to change because her father has just remarried a woman named Tracy and the three of them are going to move into their own house after her father’s and Tracy’s honeymoon. Nana is going on an international trip while her apartment undergoes renovations during the same period. Emma is supposed to stay with one of her best friends, Bridget. However, things change when Bridget’s grandfather has a health crisis and her family has to go to be with him. After trying to figure out what to do, Emma’s father, Matthew, Nana, and Emma decide that staying with Emma’s maternal grandmother, Mimi, in a place called North Lake is an option even though Emma has not been there since she was four years old. Mimi agrees and Matthew takes Emma there.

When Emma arrives, she learns that there are two different communities on the two sides of the lake. Her mother grew up in North Lake. This is where working class people leave year-round. Her father vacationed on the other side, called Lake North which targeted rich vacationers. The developer created the name to make it appear to be different from the working class side of the lake. Emma meets her aunt, Celeste, and her cousins Jack, Trinity, Bailey who are close to her age and a younger relative named Gordon as well as her older cousins’ friends April, Vincent, Taylor and Roo. It turns out that she met them during her previous visit, but she does not remember them. Roo, remembers her and it turns out that they were inseparable when she was there. Roo’s father, Chris, was also her mother’s best friend. He died in a motorboat accident looking for her mother on her mother’s birthday.

During the discussion about whether Emma should stay with Mimi, Matthew warned Emma that the people in North Lake were different from them. Emma finds out that they think that she is different from them and that they do not like people from Lake North. Emma shows that she is not different by helping her family when needed. In addition, she uses the name Saylor, instead of Emma. Mimi and her mother called her that. She also learns that there is friction in the family because Bailey likes Colin, a vacationer in Lake North. This relationship causes Emma to meet Colin’s bet friend, Blake. However, even though Blake kisses her, Emma is interested in Roo, not him. Emma’s stay in North Lake also allows her to learn about her mother’s past through Roo’s mother’s photographs.

She is absorbing this information and experimenting with her identity as Saylor when he father calls to say that he, Nana, and Tracy are coming to pick her up. None of their residences are ready, so they are going to stay in a hotel called The Tides in Lake North. Emma sulks when she has to go in spite of her cousins telling her how lucky to is to be staying there. Bailey finally says that she is spoiled. This hurts Emma’s feelings, so in spite of receiving invitations to go to see her family, she continues to sulk in Lake North. In addition, the person she really wants to see is Roo and she has not heard from him.

She finally gets the opportunity to see him at Taylor’s birthday party. During the evening, however, she drinks, which is something she never does, and gets drunk. Bailey and Roo take her home and Emma’s father grounds her due to her behavior. As a result of getting drunk she realizes that being a party girl is not her identity. She finally begins to talk to her father to understand who he is and her father, noting a change in her, opens up. Then a storm arrives.

During the storm, Trinity, who is pregnant and alone with Gordon, sends distress messages. When Emma and Matthew realize that there is a problem because Trinity cannot find Gordon, they decide to go to North Lake in spite of the storm. Emma manages to get in the car which is squeezed against the wall and other cars, and move it out even though she did not previously like to drive. When they get to house, her father finds Gordon in the place that Emma’s mother used to frequent when she wanted to hide. By the end of the narrative, Emma has taken great strides in finding her identity. She properly grieves her mother and takes control of her future by driving home alone.

More summaries and resources for teaching or studying The Rest of the Story.

The Rest of the Story from BookRags. (c)2022 BookRags, Inc. All rights reserved.