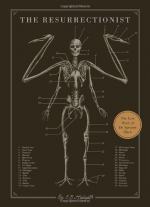 The Ressurectionist Summary & Study Guide includes comprehensive information and analysis to help you understand the book. This study guide contains the following sections:

This detailed literature summary also contains Quotes and a Free Quiz on The Ressurectionist by E. B. Hudspeth.

In The Resurrectionist by E. B. Hudspeth, Spencer Black is born into a medical family. To help his father with medical research, Spencer and his brother Bernard go out late at night with their father to dig up, or “resurrect,” corpses from the graveyard. For Spencer's brother Bernard, this childhood experience leads to a healthy scientific interest. However, for Spencer it develops into sacrilegious desire to peer into humanity’s early evolution, or perhaps its future.

Dr. Spencer Black wins early renown as a surgeon, but his interest in deformities and mythical creatures tempts him to use his surgical skills to fashion unholy creatures out of parts of various animals. He sews wings on a dog and a young woman, and his notebooks describe in detail the anatomy of such mythical creatures as mermaids, minotaurs, sphinxes, and harpies.

If Dr. Black seems like a normal person in the beginning, his interest in uncommon anatomical structures and mythical life forms turns him into a recluse whose mental stability is in question. He is pursued by colleagues and ex-colleagues who consistently deride his theories and his creations in the papers. When he loses his funding, he becomes a showman in a traveling road show with ‘freaks’ and deformed people. Dr. Black presents them as relics of ancient creatures and generates controversy wherever his show presents its spectacle.

When Dr. Black gets frustrated with fighting the crowds, he decides that they need evidence of his theories about the deformities harkening back to primitive mythical creatures. So, he uses his surgical techniques to graft together new kinds of creatures. When his wife is appalled by the creatures he is fashioning in his workshop, she attempts to burn it down. Instead, she is burned in the process.

Depressed and persecuted, but staunch in his beliefs about mutations and semi-human creatures, Dr. Black creates yet another road show, the Human Renaissance. While he does not say as much, it seems clear from his exquisite knowledge of the harpy that he has ‘resurrected’ his wife in the form of a winged woman who persecutes him with her hellish song. The narrative of his life presented here follows him from birth in 1851 to his disappearance in 1908. The last evidence of his life is a long, self-incriminating letter to his brother, apologizing for the abnormalities in his career and the monstrosities he has created.