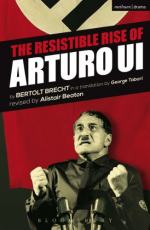 This detailed literature summary also contains Quotes and a Free Quiz on The Resistible Rise of Arturo Ui by Bertolt Brecht.

The following version of this book was used to create the guide: Brecht, Bertolt. The Resistible Rise of Arturo Ui. Bloomsbury, 2013.

Bertolt Brecht’s satirical drama “The Resistible Rise of Arturo Ui” recasts the historical events leading to the rise of Adolf Hitler in the guise of depression-era Chicago, and is what Brecht’s Master of Ceremonies lovingly calls the “great historical gangster play” (5). Chicago represents Germany, and later in the play, Cicero takes the place of Austria, illustrating the expansion of the Third Reich into neighboring countries. Ui, representing Adolf Hitler, is looking to expand his power, and the Cauliflower Trust, a financial think tank symbolizing East German landowners, simultaneously wishes to expand their profits in such hard times.

The Cauliflower Trust (made up of four characters in the beginning of the play, Clark, Sheet, Butcher and Bowl) bribes Dogsborough, and forces him to help them secure a loan from the city for a dock improvement project, a task they do not intend to complete, in exchange for Sheet’s company. The loan, technically given to Sheet’s company by the city, implicates Dogsborough in the plot through his agreement to support the Trust, and his obtainment of Sheet’s company. Arturo Ui catches wind of this public betrayal by one of their own (Dogsborough is a well-respected man, and considered honorable at this point), and attempts to threaten Dogsborough into putting his public support behind Ui, lest the public find out he was involved in the scandal. Dogsborough refuses, and Ui leaves swearing that “one day/ the vegetable business shall be mine!” (32).

Meanwhile, the city begins to investigate the dock scandal, a reference to the Eastern Aid Scandal in Germany, and inadvertently aligns the capitalist interest of both the Cauliflower Trust and the fascist interest of Ui and his gangsters. Sheet fails to show up at city hall, where he is supposed to make a statement claiming the shipping line is still his, and a newspaper boy brings the news that he has been murdered. Clark’s comment “I guess [our man and Sheet] couldn’t come to an agreement” lets the audience know that the Cauliflower Trust has murdered one if its own (35).

The meeting at city hall begins, and Dogsborough brings in the only person willing to lie for him at a time such as this: Arturo Ui. When the city clerk O’Casey accuses Dogsborough of “abuse of the public trust/ deceit and theft”, and attempts to call Bowl to the stand, machine guns are heard, and the body of Bowl is brought into the building (42). Amidst the tumult, O’Casey is forced to abandon the inquiry, and Ui’s connection to Dogsborough is solidified.

Having secured his place through his testimony on behalf of Dogsborough, and thusly his usefulness to Clark and the Cauliflower Trust, Ui sets his sights on the purveyors of the trust’s goods: the greengrocers. Offering them protection for a price, Ui is met with their hesitance at paying for protection against a common enemy (the working man, the proletariat) who has yet to cause any trouble in their stores. One man, Jim Crockett, stands up against Arturo and his fascist gangsters; as a result, they burn down his warehouse. Ui’s offer to grocers is summed up perfectly by Givola: “What’s it gonna be, murder or protection?” (55).

The warehouse fire causes another investigation, during which the power Arturo Ui and his gangsters hold over the justice system with their threats of violence becomes obvious. The judge is in their pocket, and too afraid to convict Giri and his gangsters. Instead, Arturo and his followers frame an innocent man, Fish, who is drugged and unable to give any real testimony in court. The judge announces the courts findings: Fish is guilty, and the gangsters walk free.

However, the success that meets Ui and his henchman causes its own issues amongst the gangsters ranks: Roma begins suspecting Giri and Givola of plotting against Ui, arguing that they’ll sell him out: “Wake up, Arturo. Don't you see the game?/ They play you for a sucker, Chief, they do./ They sell you down the river to these Clarks/ and Dogsboroughs. What happened to the loot/ that we was promised from the City Loan?” (70). Ui informs his men of his plan to continue expanding his criminal enterprise beyond the city limits of Chicago itself, and to move into neighboring Cicero as well. Roma believes he has Ui convinced that Giri and Givola are plotting against him, yet when Roma waits in ambush, Ui arrives with Givola, who promptly shoots Roma, ending the internal conflict.

Moving on to his next victims, Ui invites Ignatius Dullfoot, owner of the Press in Cicero and Betty Dullfoot, who operates the vegetable trade in the city, to Chicago in order to discuss his “protection or murder” proposition. Ignatius doesn’t wholeheartedly agree with Ui’s Plans, and is subsequently murdered by Giri. At her husband’s funeral, Betty confronts Ui, but his threat of violence is too much, and as Ui phrases it, “Consider [Dullfoot’s] departure./ Gone is the voice of Cicero, to cry/ Force! Terror! Violence!” (98).

Ui and the Cauliflower Trust enter Cicero, and follow Ui’s plan to expand his corrupt cauliflower empire. A gathering is called between the grocers of Chicago and those of Cicero, where Clark announces that, in the wake of “negotiations lasting several weeks”, that “Mrs. Dulfoot’s/ Company has merged” with The Cauliflower Trust (103). Ui speaks to the crowd of grocers afterwards, claiming that it was Ignatius Dullfoot who, seeing the success of Ui’s protection in Chicago, proposed the same system be constructed in Cicero (104). Proposing a vote as to whether the Grocer’s desire his protection, Ui’s disguises terror as democratic process, and seamlessly continues his criminal enterprise.

“The Resistible Rise of Arturo Ui” ends with the actor playing Ui addressing the audience, not as Ui but as a voice of reason: “…let’s not drop out guard to quickly then:/ Although the world stood up and stopped the bastard/ The bitch that bore him is in heat again” (107). The play both begins and ends with warnings to the reader or audience,a framework which opens up the potential for the play to function as a springboard for aesthetic resistance to socio-political issues.