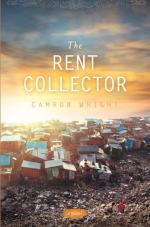 Camron Wright
This Study Guide consists of approximately 46 pages of chapter summaries, quotes, character analysis, themes, and more - everything you need to sharpen your knowledge of The Rent Collector.

This detailed literature summary also contains Quotes and a Free Quiz on The Rent Collector by Camron Wright.

In The Rent Collector, Cameron Wright tells the story of a young family living in "the largest municipal waste dump in Cambodia" (5). Through the first-person narrative of Sang Ly, Wright explores the ways in which the acquisition of language alters or illuminates the most difficult of human circumstances.

Struggling to support themselves foraging for junk in the dump, Sang Ly, and her husband Ki, attempt to heal their sick child, Nisay, while warding off violent and lawless gang members, and attempting to make their rent. When the rent collector, Sopeap Sin, visits the family's home demanding payment, she is unexpectedly taken by Nisay's children's book. Discovering Sopeap is literate, Sang Ly devises a plan to learn to read and write from the old miserable woman. She hopes an education will someday allow her to escape Stung Meanchey.

Known for her short temper, frequent drunkenness, and graceless spirit, Sopeap is initially resistant to Sang Ly's request. After establishing several conditions, she finally agrees to teach Sang Ly, and waves the couple's rent. Though Sopeap is unreliable during the first lessons with Sang Ly, she eventually devotes more attention to her new pupil.

The more Sang Ly learns, the more she wants to know. When Sang Ly asks Sopeap to teach her about literature, Sopeap warns her about the dangers of probing this rich and complicated world. Sang Ly is determined.

As their lessons become increasingly detailed and expansive, Sang Ly's relationship with Sopeap grows. Though Ki is proud of his wife, he remains skeptical about her connection with their infamously crabby rent collector. His preoccupation with the gang, their brutality, and the lack of law enforcement at Stung Meanchey, causes Sang Ly to wonder if her husband is the hero or the villain of her story.

When Lucky Fat, a young orphan boy in the community, asks Sang Ly to help him protect his young friend Maly, Ki joins the effort, and agrees to hide the girl in their home. His kindness and generosity begin to prove his strength of character to Sang Ly.

Throughout these events, Nisay continues to suffer from severe dehydration, malnutrition, and diarrhea. Despite Sang Ly's visits to both Eastern and Western doctors, Nisay remains frail and ill. One day, just before Sang Ly's scheduled lesson, Nisay becomes markedly worse, nearly immobilized by weakness. With the help of a generous moto driver, Sang Ly manages to bring Nisay into the children's hospital. While Sang Ly is waiting for the doctor's word, Ki shows up. He tells Sang Ly he ran to every hospital he could think of in order to find her. Sang Ly is grateful for her husband's gentleness and devotion to their family.

With Nisay stable, Sang Ly continues her lessons with Sopeap, eventually learning the truth about the children's book that had meant so much to Sopeap. Sopeap reveals that her friend wrote the story about her and her son. Her friend, however, was killed during the Khmer Rouge revolution. Overtime, Sang Ly realizes how many layers Sopeap has. She discovers her teacher used to work at the university in the province, and was formerly educated in America. Shortly after Sang Ly's cousin reveals that Sopeap is perilously ill, Sang Ly and Ki must leave town to pursue the help of the Healer on behalf of Nisay.

When the family returns to Stung Meanchey, Sopeap is gone. Sang Ly frantically searches Sopeap's home and her stories for a clue of her whereabouts. Through Sopeap's writings, Sang Ly learns that Sopeap's real name is Soriyan. She assumed the name of her housekeeper after employee and family were killed during the revolution. Sopeap's epilogue reveals her life's work to atone for her housekeeper's death, and to make right by her family.

Desperate to see her teacher and friend before she dies, Sang Ly tirelessly searches for Sopeap. She finds the original Sopeap's family, and tells them the truth of their daughter and sister's sacrifice, and the generosity of her former employer. Eventually she locates Sopeap at her old home in the province, where she has gone to die. Sang Ly assures her that her life has been worthwhile and valuable, and reads to her until she dies.

In the final chapter of the novel, Sang Ly reinvents Sopeap's story, casting her as a goddess in disguise, sent from heaven to show grace and kindness to humans. Though she has lost her friend, Sang Ly finally realizes the beauty and goodness in her life, even in Stung Meanchey.

More summaries and resources for teaching or studying The Rent Collector.