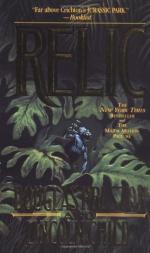 The Relic Summary & Study Guide includes comprehensive information and analysis to help you understand the book. This study guide contains the following sections:

This detailed literature summary also contains Topics for Discussion and a Free Quiz on The Relic by Lincoln Child.

Relic is the first fiction collaboration between authors Douglas Preston and Lincoln Child. The week before a new exhibit is about to open at the New York Museum of Natural History, two children are murdered. During the investigation, a guard is killed and a police officer goes missing. Special Agent Pendergast, a New Orleans FBI agent, comes to New York to assist in the investigation, but he is taken off the case when he tries too hard to stop the inevitable disaster that takes place the night of the exhibit's opening. Now a dozen party-goers find themselves fighting for their lives as they are stalked by a creature that even the scientists at the museum do not understand. Relic is a horror story that belongs in the ranks of Stephen King or Michael Crichton, a fine first novel for these two talented authors.

Margo Green arrives at her office in the Museum of Natural History only to learn two children have been killed in the museum's basement. Margo is shocked and haunted by these murders, especially as it comes on the heels of her own father's death. Margo attempts to concentrate on her dissertation, but finds herself constantly distracted by the murders, especially when another takes place.

As the police investigate the murders in the museum, the director of the museum continues to push forward with the planned opening of a new exhibition, the Superstition Exhibit. When Special Agent Pendergast arrives from the FBI's New Orleans office, he takes over the case from New York Police Detective D'Agosta. D'Agosta likes Pendergast and does not mind sharing the investigation with him, especially when he witnesses Pendergast taking the pompous director of the museum down a few pegs. However, this moves causes Pendergast to be removed from the case even as he comes close to discovering the true nature of the killer.

Fear runs rampant in the museum, causing many of its workers to call in sick and others to quit their jobs. Despite this fear, writer William Smithback Jr. finds himself fascinated with the idea of a killer, hoping to write a book about it and becomes a bestselling author. Smithback is already at the museum to write a book about the Superstition Exhibit, but finds himself so heavily censored that he begins to wonder if maybe it might not be a better idea to break his contract and sink his teeth into the murder mystery.

On the night of the Superstition Exhibit's opening, it seems everyone who is someone in New York society has shown up. The new FBI agent in charge has had the museum locked down tight, leaving just one security gate open to allow people to flow in and out of the museum. This proves to be a mistake when, at practically the same time, the computer room suffers gunshots, causing the power to go out, and a body is found in the exhibit. The one open security gate closes, locking D'Agosta, Pendergast, and Smithback in the museum. Pendergast leads D'Agosta and Smithback's group into the subbasement while he and Margo hunt the creature on other floors of the building.

Pendergast and Margo manage to attract the creature toward them near the computer room. Margo, who has defined the creature's features thanks to a computer program, is able to tell Pendergast how to kill it. With the creature dead and everyone safe, the scientists are able to discuss what happened and how the creature might have been created. However, none of them, except for Gregory Kawakita, realize the true nature of the creature. Kawakita recognizes that the creature was once a scientist named Whittlesey who found a tribe of Indians thought extinct in the Amazon. Whittlesey was force fed a rare plant that caused him to change into the creature. Kawakita has discovered how to grow the plant and he now sells it on the street.