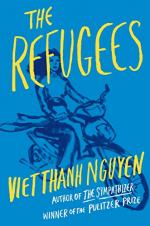 Related Topics
The Sympathizer
Nothing Ever Dies: Vietnam and the Memory of War
The Committed

Viet Thanh Nguyen
This Study Guide consists of approximately 79 pages of chapter summaries, quotes, character analysis, themes, and more - everything you need to sharpen your knowledge of The Refugees.

The Refugees Summary & Study Guide includes comprehensive information and analysis to help you understand the book. This study guide contains the following sections:

This detailed literature summary also contains Quotes and a Free Quiz on The Refugees by Viet Thanh Nguyen.

The following version of this book was used to create this study guide: Nguyen, Vietnam Thanh. The Refugees. Grove Press, 2017.

The Refugess is a collection of eight short stories, all centering around the experience of refugees from the Vietnam war and their descendants. The stories are narrated in both first and third person and occur during the years from the 1970s-2001.

The story is narrated in the unnamed first-person by a 38-year-old ghostwriter who had not yet dealt with the trauma of her childhood. She was visited by the ghost of her older brother, who died when they were fleeing Vietnam and when the siblings were children. Her brother was killed by pirates who attacked their small, overpacked fishing boat, when he tried to protect her from being taken by them. Her brother, a corporeal ghost, swam across the world to find the narrator and her mother, and forced the narrator to remember and deal with his death and the rape she was a victim of. Once she faced her past, her brother's ghost disappeared. The narrator was able to put her past behind her enough to move forward, and by the end of the story, she committed to writing her own stories instead of the stories of others. Although the story is mostly in past-tense, there are metatextual moments that call attention to the act of storytelling itself.

Narrated in past tense by a third person narrator, "The Other Man" tells the story of Liem, an 18-year-old Vietnamese refugee in the 1970s, who was placed with a sponsor in San Francisco. Parrish Coyne, the sponsor, was a gay man who lived with his partner, Marcus Chan, a student from Hong Kong, in a mauve house in the mission district. At first, Liem was surprised and put off by the two men's relationship, because he had never seen a gay couple before. Liem found himself a menial job and kept himself busy, until Parrish went out of town for the weekend, leaving Liem and Marcus alone in the house. After a dinner together, the two men had sex and Marcus asked Liem what he wanted to be. The question and the new experience made Liem both uncomfortable and hopeful. By the end of the story, he began to imagine a different future for himself, despite receiving a letter from his family. He would be tethered to his past, but because of his new country, he had the possibility of imaging a new future.

The story is narrated by the grown son of Vietnamese refugees who own a grocery store in Little Saigon in California. The narrator recalled a moment in his childhood, when he was 13 years old and his mother was threatened by Mrs. Hoa, a woman raising funds for the anti-communist guerrilla forces in Vietnam. When his mother refused to give any money, Mrs. Hoa threatened to make the neighbors think that the family were communist sympathizers, and therefore destroy her business. The boy went with his mother to follow Mrs. Hoa to the woman's home, where they learn that Mrs. Hoa had lost all of her family to the war and spent her time tailoring uniforms for the troops in Vietnman. Moved by what she had seen, his mother gave Mrs. Hoa the profits for the day.

In one of the few stories where the protagonist is not a Vietnamese refugee, "The Transplant" is narrated in the past tense, third person and tells the story of Arthur Arellano, a Mexican-American who received a liver transplant from a Vietnamese donor. When a hospital billing error gave the name of his donor, Arthur found Louis Vu, who said he was the donor's son. Arthur, who had recently reunited with his wife, agreed to hold Louis's counterfeit goods in his garage, but when he found out that Louis was not actually the donor's son, he was stuck. Louis was a Chinese man who had been born and raised in Vietnam after the communist revolution in China made refugees of his family, and then came to California, when the Vietnam war make them refugees once again. Because Arthur made the mistake of telling Louis about his brother's undocumented help, Arthur cannot get rid of Louis.

Narrated in third person, past tense, the story follows the story of the professor and his wife, Mrs. Khahn. The professor was suffering from the early stages of dementia, and over the course of the story, he grew more confused and lost in his own mind, as he began calling his wife by another woman's name. Little by little, the narrative revealed the backstory of the Khahns, and we learn that they were the product of an arranged marriage in Vietnam and went through the difficulty and terror of escaping the country as refugees after the war. As Mrs. Khan dealt with her frustration and jealousy, she also committed herself to staying by her husbands side.

In "The Americans," James Carver and his wife Michiko visited their daughter Claire, where she was working in Vietnam as an English teacher. Carver, an African American man from Alabama, few as a bomber pilot during the Vietnam war and later as a commercial airline pilot. Carver was unhappy to be in Vietnam, and found fault with many of his daughter's decisions, especially her decision to stay in Vietnam indefinitely. Claire told her parents that she never felt as though she had a home until she arrived in Vietnam, and that she felt like she had a Vietnamese soul. Her work in the country was, in part, to make up for the things she believed her father did during the war. When Carver expressed his frustration with Claire's boyfriend and the fact that his anti-mine robotics were being funded by the Department of Defense, and could someday be used as a weapon, he and Claire had an argument that sent him storming off into the jungle. When a monsoon hit, Carver was drenched and came down with pneumonia. Despite their argument, he woke in the hospital to find Claire sleeping on the floor near his bed.

"Someone Else Besides You"

In "Someone Else Besides You," Thomas, 33-year-old man, narrates his experiences living with his father after his mother died a year before. Told in past tense, Thomas revealed his father's story and his own in piecemeal fashion, drawing out small details to build their backstories as the story progresses. Thomas worked as a service representative and night watchman, to keep himself from thinking about the fact that his wife left him. His father, a stern man who Thomas was afraid of becoming, saw that his son needed help, and forced Thomas into visiting his ex-wife, who they discovered to be pregnant with the baby Thomas was reluctant to have with her. After slashing the ex-wife's tires, Thomas's father told him that men knew what was right and wrong after decisions were made. Sam, the ex-wife, came to confront Thomas about the car, and he asked to be the father of her child, making an active decision in his own life.

Narrated in the third person, past tense, "Fatherland" tells the story of Phuong, who is the oldest child of her father's second family. Her father, Mr. Ly, named his second family after his first family after his first wife left him and took their children to America after the war. His oldest daughter, who shares a name with Phuong, has decided to go by the name of Vivien. She was planning on visiting Vietnam and wanted to stay with her father and his family. When she arrived, Vivien was as glamorous as Phuong imagined she would be, and the family took her to all of the major tourist spots. Phuong discovered, however, that Vivien was not what she seemed. After Phuong asked Vivien to sponsor her so that Phuong could come to the United States, Vivien admitted that her mother had lied and that the American family was not as well off as they pretended to be. Disillusioned, Phuong no longer envied her half-siblings and decided to figure out her own way to make a better future for herself.

More summaries and resources for teaching or studying The Refugees.

The Refugees from BookRags. (c)2022 BookRags, Inc. All rights reserved.