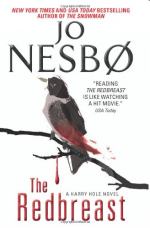 The Redbreast Summary & Study Guide includes comprehensive information and analysis to help you understand the book. This study guide contains the following sections:

This detailed literature summary also contains Quotes and a Free Quiz on The Redbreast by Jo Nesbo.

The Redbreast by Jo Nesbo is a complex story that takes place over many decades. The book begins as two separate stories which seem to have no connection. However, as the stories progress, links between them begin to emerge. By the conclusion of the narrative, they have become one story.

The novel opens in present-day Norway. Harry Hole, a veteran Norwegian police officer, is a member of the Crime Squad. His partner is Ellen who is training under him. Harry quickly observes that Ellen is very bright and intuitive. His ego is healthy enough that he able to open himself up and learn from her. Harry has had a long-standing problem with alcoholism. But, he has been sober for over a year and wants to stay there. Although his desire to beat his alcoholism is genuine, he must be constantly on the alert for the demons of sabotage – self-doubt, fear of failure, and even fear of success.

Harry and Ellen and other Norwegian police officers are trained by the US Secret service for the security detail when the US President and other world leaders visit Oslo. The training was specific with no gray areas. When Harry spots a gunman where no one was supposed to be, Harry followed his training and his instincts and shot him. As it turned out, the man was a US Secret Service agent who was in the wrong place at the wrong time. He survived without debilitating injuries. The US Secret Service was blamed for the incident but the authorities decided to keep the whole incident quiet. Harry was transferred to a less transparent position in the security or POT unit. He was also promoted to Inspector which he found rather ironic.

The second story takes place in the early 1940s on the Eastern Front during World War II. The story focuses on a unit of young Norwegian men who volunteered to fight against the Allied Forces, specifically Russia, in trench warfare. The men were subjected to the brutality and cruelty of war. Some of the men died, some lived, some deserted and some were injured and sent to the hospital. One of these soldiers became embittered by what he viewed as betrayal. He survived the trenches but he was never able to forgive the abandonment he felt from the Norwegian royal family.

As the years pass, his anger and rage doesn’t subside and he begins to believe that there were too many betrayals and he could not them let stand. As he ages, his derangement becomes chronic and more embedded. When he learns he was dying of cancer, it compels him to take action while he could. The man who is old and sick now plots the assassination of the Crown Prince whose father, in his view, turned his back on the Norwegian soldiers after the war. And there are others with whom he has scores to settle on the pathway to the assassination that he plans for Norway’s Liberation Day celebration.

The old man leaves a trail of murder and terror and Harry begins to connect the dots and is hot on the trail of the madman. Although there were more questions than answers as the investigation progressed, Inspector Harry Hole does not give up until he uncovers who the mass murderer is and what had caused his madness.