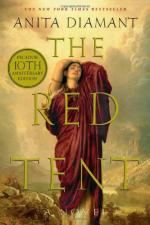 Anita Diamant
This Study Guide consists of approximately 43 pages of chapter summaries, quotes, character analysis, themes, and more - everything you need to sharpen your knowledge of The Red Tent.

This detailed literature summary also contains Topics for Discussion and a Free Quiz on The Red Tent by Anita Diamant.

The Red Tent by Anita Diamant tells the story of the biblical character Dinah, Jacob's daughter and Joseph's sister. In the Bible, Dinah's story is only briefly mentioned. The story says that Dinah was raped by an Egyptian prince. Simon and Levi, two of her brothers, avenge Dinah by killing all the men in the city. After that, Dinah is never mentioned again. Diamant wanted to give a voice to the character of Dinah as well as her mothers.

The novel begins with Dinah's mothers' stories. Dinah explains that because her father Jacob had four wives, she had four mothers: Leah, Rachel, Zilpah, and Bilhah. While Leah is Dinah's birth mother, as a child she learned from and loved her mother and "auntie-mothers." Before Dinah's birth, the women fulfilled their duties by bearing sons, but they longed for daughters. To them, daughters listened to their stories and shared them with the next generation of women.

Finally, Dinah is born to Leah. Dinah becomes close with Joseph, Rachel's son, because he was nursed with her. When her family prepares to move to Canaan, Dinah gets her first big adventure. She encounters huge lakes and Inna tells her she will only be happy living near water.

On the way to Canaan, Dinah meets her cousin, Tabea, who is a daughter of Esau. This is the first time she has ever been around another girl her age. They part ways, but plan to meet up again in a part of Canaan called Mamre. There, Dinah meets her grandmother, Rebecca. Finally, she sees Tabea again, who is now a woman. Rebecca is furious to find that Tabea's first blood has been wasted and throws Tabea out of her tents. Dinah hates Rebecca for what she has done.

Dinah is very observant and watches her mothers, family, and surroundings very closely. She learns from Rachel and Inna how to be a midwife. She goes to Shechem with Rachel to attend a birth and falls in love with Shalem. Dinah and Shalem marry, but her family is not happy. Simon and Levi accuse Shalem of raping Dinah. They go to Shechem and murder all the men while they recover from their circumcisions. Dinah is devastated and outraged. Through strength she has never known, she curses Jacob's tribe.

Dinah escapes to Egypt with Shalem's mother, Re-nefer. They discover that Dinah is pregnant and Re-nefer says she wants to raise the baby as a prince of Egypt. Dinah agrees because it is what is best for the child. While she and her son, Re-mose, are close when he is younger, they grow apart. Re-mose wishes to be rich and successful and has no time for his foreign-born mother. Thankfully, Dinah meets a midwife named Meryt, who becomes a close friend and mother-like figure. Dinah also becomes a successful midwife.

Dinah also meets a carpenter named Benia. They are attracted to one another, but Dinah makes no attempt to become his wife right away. Three years later, Meryt decides to move to the Valley of the Kings and takes Dinah with her. Dinah and Benia meet again. Benia declares his love for Dinah and they are married.

Dinah is called by her son to attend the birth of Zafenat Paneh-ah's son. While there, Dinah finds out that Zafenat Paneh-ah is really Joseph. The reunion is not happy because Re-mose has learned the truth about Joseph, his mother, and his father's death. Re-mose threatens to kill Joseph, but Dinah urges him to leave. It is that last time she ever sees her son.

Dinah returns home. Years with Benia happily pass, then one day Joseph comes to visit. He wants Dinah to go to Canaan with him because Jacob is dying. At first Dinah refuses, but then agrees. While there, no one notices Dinah. To them, Dinah is dead. But then she speaks to one of Jacob's grandchildren. The girl, Gera tells Dinah the story of Dinah. Dinah is happy to learn that her story has not been forgotten. She becomes certain that her story and the legacy of her mothers will live on.

More summaries and resources for teaching or studying The Red Tent.