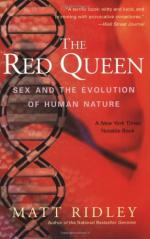 The Red Queen: Sex and the Evolution of Human Nature Summary & Study Guide

Matt Ridley
This Study Guide consists of approximately 27 pages of chapter summaries, quotes, character analysis, themes, and more - everything you need to sharpen your knowledge of The Red Queen.

The Red Queen: Sex and the Evolution of Human Nature Summary & Study Guide includes comprehensive information and analysis to help you understand the book. This study guide contains the following sections:

This detailed literature summary also contains Topics for Discussion and a Free Quiz on The Red Queen: Sex and the Evolution of Human Nature by Matt Ridley.

The Red Queen is an investigation into how sexual selection and the arms race for reproductive advantage between males and females is responsible for many cultural and biological facts that are characteristic of humans. In the book, the author explains both the biology and how that biological facts translate into culture differences. Fashion, beauty, monogamy, intelligence, and many other aspects of human psychology are explained through biological evolution by way of sexual selection.

The Red Queen begins with a defense of the concept of "human nature." The author argues that there is a definitive human nature that we can productively study through the evolutionary method. He then goes on to lay out the concept of the Red Queen and to explain sexual selection. A problem is posed as to how sexual reproduction can ever compete with the seemingly more effective method of asexual reproduction. The solution is found by looking at the effects of parasites and diseases on organisms. A disease that infects an asexual organism will be able to infect all of the clones that are descended from and genetically identical to the original organism. Sexual reproduction causes a reshuffling of the "genetic deck" every generation allowing organisms to avoid debilitation by parasites and diseases. Two genders, rather than hermaphrodites, develop as the result of an arms race and a competition between different kinds of genes. Once the genders have developed, all the pieces are in place for the Red Queen and sexual selection. The rest of the book explains the different human characteristics that are the result of sexual selection.

Next we find an explanation of the importance of sexual selection. Certain traits such as the Peacock's tail, are detrimental to a creature's survival because they alert predators to the presence of the creature but are also nevertheless selected for. The only viable explanation for this lies in the preference of the organism's reproductive partners for those traits. However, both men and women have different reproductive interests. Males prefer to have multiple reproductive partners to maximize the transmission of their genes. Females, on the other hand, must carry the young and raise them. They prefer the quality of reproductive mates to the quantity of reproductive mates. These different interests lead to different preferred social institutions. High status males thus prefer polygamy whereas females prefer monogamy. The result is a system of monogamy characterized by considerable adultery. Women are willing to settle for acceptable husbands while still seeking exceptional reproductive partners on the side. These different interests have led to different propensities in the human mind and different mental specialization between females and males.

More summaries and resources for teaching or studying The Red Queen: Sex and the Evolution of Human Nature.

The Red Queen: Sex and the Evolution of Human Nature from BookRags. (c)2022 BookRags, Inc. All rights reserved.