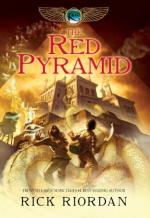 Rick Riordan
This Study Guide consists of approximately 70 pages of chapter summaries, quotes, character analysis, themes, and more - everything you need to sharpen your knowledge of The Red Pyramid.

This detailed literature summary also contains Topics for Discussion and a Free Quiz on The Red Pyramid by Rick Riordan.

The Red Pyramid by Rick Riordan is a fascinating fantasy novel about a pair of siblings who must work together to save the world. After witnessing their father disappear after performing a feat of magic, Sadie and Carter Kane struggle to accept the truth of Egyptian mythology, battling gods and demons in their effort to save their family and the world. The Red Pyramid is an engaging and entertaining novel that demonstrates the loyalty and tenacity of this brother and sister duo.

At the British Museum in London, Carter and Sadie Kane watches their father, Julius, summon five gods from the Rosetta Stone, but Julius is imprisoned in a coffin by Set, the Egyptian god of chaos. The police question the children at their grandparents' house, but their Uncle Amos kidnaps them, with their grandparents' consent, and takes them to their family mansion in Brooklyn, atop a warehouse. While sleeping, Carter's ba—his spirit— travels to Phoenix, Arizona, where he learns that Set plans to summon a storm to demolish the continent on the third Demon Day, Set's birthday. When Carter tells Amos about this the next morning, Amos leaves the children to search for Set in order to learn more about his plans.

After Amos leaves, the mansion is attacked by Set's minions, but when Sadie tells her cat, Muffin, to save them, the cat transforms into the fierce goddess, Bast, who defeats Set's minions and takes the children to Central Park where they are accosted by Serqet, the scorpion goddess. While searching for the temple in the Metropolitan Museum, Sadie and Carter are joined by Zia Rashid, who helps them escape through a portal to go to the House of Life where they will be trained as magicians. Unfortunately, Sadie and Carter must soon leave the First Nome when Chief Lector Iskandar dies and is replaced by Desjardins, who views them as a threat since they host gods, Horus and Isis, something that is forbidden by the House.

In Paris, the children, with Bast's help, retrieve a book that instructs them on how to defeat Set. They visit the author, Thoth, who tells them Sadie will be able to read the spell when the time comes. Thoth also informs them they will need the Feather of Truth and Set's secret name to defeat him. After traveling to the Land of the Dead and convincing Anubis to give them the Feather of Truth, Carter and Sadie seek Nephthys to learn Set's secret name, but when they are attacked by Sobek, Bast sacrifices herself to save them.

Amos finally rejoins his niece and nephew in time for them to meet Zia in Las Cruces, New Mexico, but Desjardins attacks the Kanes, summoning Sekhmet who Sadie, Carter and Zia defeat. Zia accompanies the Kanes to Phoenix, and while Carter battles Set, Sadie transports the pyramid to Washington, DC after realizing they cannot defeat Set in his place of power, the desert. Before Sadie can complete the spell, she sees Apophis, the god of chaos, and realizes Apophis plans to use the power from the pyramid for herself. After discontinuing the spell, Sadie forces Set to help them save the world from Apophis. In order to prove to Desjardins that they are not possessed by the gods they are hosting, Sadie and Carter release the gods, storing part of their essence in their amulets.

Carter and Sadie visit the Land of the Dead again to see their father, who knew he must die to restore Osiris, the god he is hosting, to Osiris's throne. Horus and Isis express their gratitude to the Kane children by restoring their family mansion and sending Bast back to the regular world to serve as their guardian. The children use the djied amulet their father gave them to attract others who have the blood of the pharaohs because they must relearn the path of the gods in order to defeat Apophis when she attempts to rise again.

More summaries and resources for teaching or studying The Red Pyramid.