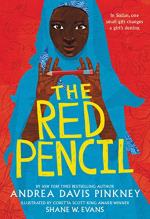 Andrea Davis Pinkney
This Study Guide consists of approximately 49 pages of chapter summaries, quotes, character analysis, themes, and more - everything you need to sharpen your knowledge of The Red Pencil.

This detailed literature summary also contains Quotes and a Free Quiz on The Red Pencil by Andrea Davis Pinkney.

“The Red Pencil” is a young adult novel by Andrea Davis Pinkney which recounts nearly ten months in the life of a 12-year-old Sudanese girl named Amira, from September 2003 to April 2004, as her village is destroyed in war and as she seeks to rise above hopelessness to attend school. When the novel begins, Amira has just turned 12, and is very hopeful and content. She has loving parents –her father, Dando, and her mother, Muma – and a younger sister, Leila, who serves both as a source of annoyance and a source of love. Amira lives on a farm with her family, raising wheat and mangoes, among other crops. Life for them is simple and good, though Amira dreams of something more. Her best friend, Halima, has moved with her family to Nyala, where Halima attends Gad Primary School. Amira longs to learn to read and write. She can already draw, and draws beautiful pictures in the sandy soil of her home. Amira’s mother is very opposed to this, believing a woman’s place is to marry, have children, and do chores – not waste their time on letters.

As time goes on, Amira notices troubled looks on the faces of her parents, and adults from the nearby village. Amira’s parents explain to her at different points that a war has erupted, in which the Janjaweed Militia are massacring anyone they deem to be inferior to themselves. One day, just after breakfast, the Janjaweed Militia arrive and slaughter hundreds of innocent villagers and farmers, including Amira’s father. Amira is stunned, for her near-perfect world has been shattered by violence and war. Family friend and neighbor Old Anwar decides that all survivors of the attack must flee as refugees to the overcrowded Kalma Displaced People’s Camp near Nyala.

There, Amira falls into such despair that she no longer speaks or draws in the dirt. One day, a pretty, foreign white woman named Miss Sabine visits the camp and distributes yellow pencils and yellow pads to all of the children. Amira feels horrible, for she did not receive anything. Miss Sabine, however, has a red pencil and one more yellow pad that she happily gives to Amira. Amira is thrilled. Slowly, she begins drawing again, depicting the assault on her village and home to get it out of her head. Old Anwar knows that Amira is slowly healing. When Leila and her friend Gamal takes Amira’s pencil and pad, Amira becomes enraged and finally speaks, telling them to return her red pencil and pad. They do so, and are incredibly happy to see Amira speaking once more.

Old Anwar consents, then, to giving Amira lessons in writing, reading, and math. The lessons are done in secret, for Muma still does not approve of girls learning anything beyond housework and farm chores. Eventually, Amira decides what she wants to do with her life: she wants to be able to read and write at will, and to teach others to read and write. She decides to sneak out of the camp and travel to Nyala, and to find a way to get into Gad Primary School. To do so, she must cross a war zone. She remembers the teachings of the Koran, taught to her by Old Anwar, to always follow the brightest path. It is then that Old Anwar arrives, first attempting to get Amira to return to Kalma, and then deciding to protect Amira on her journey to Nyala by accompanying her to the city.

More summaries and resources for teaching or studying The Red Pencil.