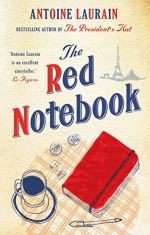 This detailed literature summary also contains Quotes and a Free Quiz on The Red Notebook by Antoine Laurain.

The Red Notebook by Antoine Laurain and Jane Aitken, begins with a young woman who is mugged on the way home from work. Her assailant knocks her in the head with a heavy object, she falls to the ground, and he runs away with her purse. People help her up, but she tells them that she is fine. She doesn't notice that she has sustained an injury to the back of her head. She tells everyone that she feels fine, but doesn't feel like going home. Instead, she goes into a nearby hotel and tells the kindly night clerk that she's been mugged and just needs a place for the night, that in the morning she will go to the police and file a report, then will be able to pay for the room. The man agrees and gives her the key to the room. She goes upstairs and promptly goes to bed.

In the morning the women working at the front desk reads the note from the night clerk telling them about the mysterious woman he's allowed to come in. They wait a good while, then decide that they better go and check on her. When they do, they find her lying unconscious in a pool of blood. She is taken to the hospital where it is determined that she is in a coma.

Meanwhile, a man named Laurent, a bookstore owner, goes out for a walk. He is not particularly happy with his life, and is wondering if he should break up with his domineering girlfriend, Dominique. He spies a woman's handbag thrown onto some garbage cans. He recalls how his wife, Claire, before their divorce, used to never part with her bags and he begins to suspect that this bag has been stolen. He investigates and discovers that it has been stolen. There's no wallet, but there are plenty of other things in it. He rescues it from the trash and takes it home.

At home he pulls out the contents and among them are a necklace with hieroglyphics on it, and a red notebook. There are also assorted odds and ends, like a lipstick, perfume bottle, a book signed by an obscure author, and some hair pins. He opens the red notebook and realizes that it is a woman's diary. He can't resist and starts reading it. As he reads it, he begins to know this woman, and finds that she is a kind, creative, witty, passionate woman, and is someone that he would really like to get to know.

Meanwhile, back at the hospital, in her coma, Laure is dreaming. She dreams that she is a child again playing in a beautiful garden. Then, her memories intrude upon her, and her former husband, Xavier, appears in the garden. Then, she is jerked out of the idyllic dream to the reality of his death. The government calling to say that he was killed while taking photos of the Iraq War. She refuses to stay in this memory any longer, indicating how painful it is, and instead, finds herself back in the garden, holding Xavier's hand.

Laurent has finished reading Laure's diary. Reading it makes him realize how Dominique pales in comparison to this woman that he's never met. Ironically, Dominique shows up at his doorstep and he hurriedly shoves all of Laure's stuff into her bag and hides it. When Dominique comes in she immediately bristles as she can smell another woman's perfume. He tells her that there is no other woman, and that no other woman has been there. She doesn't believe him. Later, they go to a party, and while there he watches Dominique, but instead wonders how Laure would be at a party. He realizes that he is being unfair to Dominique and breaks up with her.

The next day Laurent's friend Pascal, tells him that he's a fool, since Laure is a figment, and Dominique is a sure thing. It is clear that Pascal is a player and wants Laurent to be the same way. They part ways and Laurent is even more determined to find Laure. He tries to turn the bag in at the police department but they tell him that the paperwork is lengthy, so he leaves. Next, he tracks down the author of the book that was signed (in Laure's bag). The author says that he doesn't remember her name, but he does remember what she looked like. As luck would have it, he has another author do a book signing at his store, who reads hieroglyphics and he is able to translate the necklace that is in Laure's bag. It is her full name. Laurent is ecstatic because now he knows her full name and he can try to find her.

To his dismay, he finds her. She's in a coma at one of the hospitals. When he arrives there is another man there named William. He is a colleague of Laure's and has been watching her cat. The doctor introduces him as Laure's brother, but Laurent (and the doctor) know that this isn't true. William assumes that Laurent is Laure's boyfriend, and he doesn't contradict him. Laurent feels slightly bad about lying about his relationship with Laure, but when William asks him if he will stay at Laure's house and watch her cat, he jumps at it.

Meanwhile, Laure is still enjoying her dream world, but more and more of the real world begins to drift in. She hears some nurses discussing a television show, and is aware that she is in a hospital. Still, she isn't ready to wake up.

Laurent stays at Laure's house for several days. He looks through her personal items such as photo albums, books, and collections. It helps him get to know her more fully. He begins to feel very guilty about what he's doing. Later that day he meets with his daughter Chloe. She asks him to pretend to be her boyfriend when her friends show up. This upsets him but he plays along, comforting himself with the fact that at least the other boys won't come near her if they think she has an older boyfriend. He tells Chloe about what he's been doing and his involvement with the red notebook. She finds it terribly romantic, but Laurent says that he feels horribly guilty about it all.

Laure wakes up from her coma. William is there, but Laurent is not. Earlier that day he dropped off the keys to Laure's house at William's office. When Laure goes home, she finds a note from Laurent apologizing for what he did. She is not upset by it, but very moved that he would have been so kind as to go through all of that trouble just to meet her. She begins her own search to find him.

Meanwhile, Laurent is morose. Chloe knows why this is and manages to convince her mother and stepfather that one of their picture frames needed to be touched up. She does this because she has learned from Laurent that Laure was a framer in the town. She goes to several framing stores until she finds the one where Laure works, and there tells Laure where she can find Laurent at work.

Immediately Laure goes to the bookstore. She approaches the counter and asks him about a book that features a woman whose handbag has been taken and a man who runs all over town trying to find her. Laurent realizes that it is Laure and rushes into her arms. They live happily ever after.