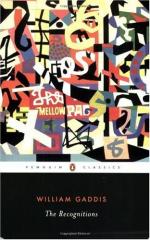 William Gaddis
This Study Guide consists of approximately 33 pages of chapter summaries, quotes, character analysis, themes, and more - everything you need to sharpen your knowledge of The Recognitions.

This satirically-named character whose moniker derives from the Latin "agnus dei," or lamb of God in the Bible, is a sun-tanned woman with a commanding voice who is married to a Hollywood screenwriter. In a sense, she is a distillation of the wealthy liberal New Yorker who is careful to observe all the politically and culturally correct behavior but who nonetheless is the subject herself of much envious gossip. She is described as "that full-blown flower whose fey petals curled and yellowed round its white spore-bearing carpel."

Esmé is a 29-year-old hippie prototype that is more a beatnik chick instead of a flower child. She presents herself as an intellectual and serious artist. Her lifestyle is open and user and"swinging" in the 1960s sense of the word. Esmé is also a heroin user and incipient alcoholic. She cares about art, her friends and her social...

More summaries and resources for teaching or studying The Recognitions.

The Recognitions from BookRags. (c)2022 BookRags, Inc. All rights reserved.