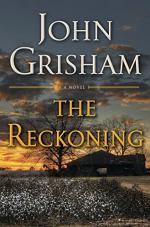 Related Topics
A Time to Kill
John Grisham
The Brethren
The Broker
The Chamber
The Client
The Firm
The Last Juror
The Pelican Brief
The Racketeer
The Rainmaker
The Runaway Jury
The Testament
Sycamore Row
Gray Mountain
The Whistler
Camino Island
The Rooster Bar
The Innocent Man
The Summons
Witness to a Trial
The Guardians: A Novel
Camino Wind
A Time For Mercy
Sooley
Calico Joe
The Judge's List
Sparring Partners
The Boys from Biloxi

John Grisham
This Study Guide consists of approximately 88 pages of chapter summaries, quotes, character analysis, themes, and more - everything you need to sharpen your knowledge of The Reckoning.

The Reckoning: A Novel Summary & Study Guide includes comprehensive information and analysis to help you understand the book. This study guide contains the following sections:

This detailed literature summary also contains Quotes and a Free Quiz on The Reckoning: A Novel by John Grisham.

The following version of the novel was used to create this study guide: Grisham, John. The Reckoning. Doubleday, October 23, 2018. Kindle.

In the historical fiction novel The Reckoning by John Grisham, war hero Pete Banning shocked his small town of Clanton, Mississippi when he murdered Methodist minister Dexter Bell. Banning refused to give anyone a motive for the murder, even to save his life. When Pete’s children learned the truth about their father’s murder, they realized that the truth does not always help to clarify matters.

Pete woke one morning and decided he could live no longer without killing Dexter. After having breakfast with his sister, Florry, Pete drove to the Methodist Church where he shot Dexter twice in the chest and once in the head. He went home where he calmly waited for the sheriff to come and arrest him. Pete offered no motive for having killed Dexter and would not allow his lawyer to use an insanity plea. At his trial, Pete was found guilty of murder and sentenced to die in the electric chair.

After the first part of the novel closes with Pete’s death and burial, Grisham carries the reader back in time to the point when Pete and his wife, Liza, first met. The eloped when they discovered they were pregnant after only a short courtship. Although Pete was a West Point graduate and hoped to make a career of the military, he and Liza were forced to move to the Banning farm during the Great Depression to save it when Pete’s parents died.

Years later, Pete was called to fight in World War II and was sent to the Philippines. He was among the soldiers who surrendered to the Japanese and forced to walk about 65 miles from Bataan to prison camps. Pete survived the march as well as his time in the prison camp though he was severely malnourished and suffered dysentery and malaria. Pete and a war buddy, Clay Wampler, escaped Japanese captivity when the freighter ship on which they were riding to be used as slave labor in coal mines was sunk by torpedoes. Pete and Clay joined guerrilla forces and fought against the Japanese. Pete suffered a broken leg when he helped destroy a bridge crucial to Japanese troops. Pete’s other leg was injured with shrapnel when he and his men happened upon a battalion of Japanese soldiers. It was just days later when Pete and the others were found by American soldiers.

In Part 3 of the novel, the story picks up where Part 1 left off. Pete attempted to save his farmland by transferring it to his children’s names just weeks before he killed Dexter. The transferred was judged illegal and the children, Stella and Joel, were in danger of losing the land. At the same time, Stella and Joel were allowed to see their mother, who had been put in a mental institution by their father shortly after he returned home from the war. They had hoped that she could help them understand why their father killed the minister, but she was so sick she was barely able to talk. They doubted she would ever be well enough to come home.

Despite what Stella and Joel thought, Liza put together a plan to sneak away from the nurses at the mental hospital and return home. Liza called Florry to meet her at the home that Liza had shared with Pete. After talking to Florry, Liza sneaked off to her husband’s gravesite where she took an overdose of medicine and died.

It was not until Florry was on her deathbed shortly afterward that her best friend, Twyla, convinced Florry that she needed to tell Stella and Joel the truth about their parents. It turned out that while Pete was in captivity in the Philippines, during a time he was presumed dead, Liza had an affair and got pregnant. She had Dexter take her to Memphis for an abortion. As a result of the abortion, Liza lost her sexual desire. When her husband came home, she lied and said she had been pregnant when he left and that she’d had a miscarriage. Pete caught her lie because he had hurt his back before he had left for active duty and has not been able to have sex with his wife as a result. The timetable she gave him did not line up.

Pete sent a private detective to abortion clinics in Memphis. One doctor recognized Liza and Dexter. Pete assumed Dexter had gotten Liza pregnant and killed him. However, Stella and Joel learned from Florry that their mother had not had an affair with Dexter but with Jupe, the grandson of Amos and Nineva, the staff that helped around the Banning home. Amos and Nineva sent Jupe north to live with relatives there when they realized what had happened. Because Jupe was black, Pete could have legally run his wife away from home for her behavior. It was believed it was because of Liza’s lie that the entire legacy of the Banning family, including the family farm, was lost.

More summaries and resources for teaching or studying The Reckoning: A Novel.

The Reckoning: A Novel from BookRags. (c)2022 BookRags, Inc. All rights reserved.