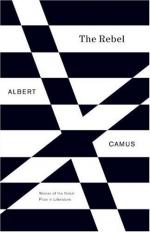 The Rebel Summary & Study Guide includes comprehensive information and analysis to help you understand the book. This study guide contains the following sections:

This detailed literature summary also contains Topics for Discussion and a Free Quiz on The Rebel by Albert Camus.

This detailed philosophical examination of the history, purposes and manifestations of rebellion places its considerations within the context of the question of whether contemporary reality's attitudes towards murder, either institutionalized or individualized, are justified. Other contextual elements include a focus on the value of the individual, the effect both moderation and excess have on both the intentions and actions of rebellion, and the relationship between rebellion and art.

In his introduction, the author professes introduces his intention to examine the origins of humanity's individual and collective impulse towards rebellion. He relates both the intention and the examination to the question of whether murder, either as sanctioned by governing society or erupting as the result of individual disenchantment, is ever justified. The relationship between the spirit/intentions of rebellion and murder is explored, in various contexts, throughout the book, starting in Part 1, "The Rebel," where the author provides a brief definition of rebellion, begins a detailed examination of different sorts of rebellion, and explores the relationship between rebellion, history and murder.

Part 2, "Metaphysical Rebellion," uses elements of Greek mythology, Roman history and the Bible as context for its examination of the history and spirit of rebellion. He then explores the work of European philosophers, particularly Nietzsche and Hegel, to examine rebellion's relationship with contemporary belief systems, particularly nihilism.

Part 3, "Historical Rebellion", places the author's examination of specific and archetypal manifestations of rebellion within the context of an analysis of the French Revolution, taking incidents and individuals associated with that particular historical event, examining them in his context of his theories about the origins of rebellion, and explores ways in which those (arguably idealistic) origins became corrupt. Examination of this corruption takes the author into a detailed consideration of the Communist Revolution, which he suggests employs various forms of terrorism to ensure the continuation of its self-interested agenda. Here he draws careful lines of distinction between the rational and irrational, suggesting that rebellion is in some ways anchored in the former, while revolution is in many ways anchored in the latter.

Part 4, "Rebellion and Art," takes the author's analysis in a different direction. Rather than exploring the idea of rebellion from a historical and/or factual perspective, he defines the spirit of rebellion by comparing it with the spirit of artistic creation, suggesting that both come from essentially the same place - the existentialist desire to affirm the value of individual human existence, and the hope inherent in that affirmation.

In Part 5, "Hope at the Meridian," the author places himself and his writings at a key point in history - the mid 20th Century, after two world wars have damaged the world's collective psyche and driven parts of it (specifically the Communist Soviet Union, with which the author is particularly concerned) into profound social, political, and spiritual instability. In this section, the author returns his focus to the question of whether murder is ever justified, examining the subject in both philosophical and historical terms.

The book concludes with an expression of hope that through moderation, in both the individual and the society in which he lives, the pure and altruistic spirit of rebellion (in which the ultimate good of all is the primary motivator of action) will take its proper place as a defining aspect of humanity's quest to improve itself.