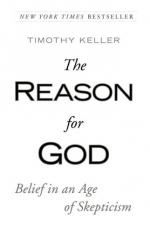 Plot Summary
+Chapters Summary and Analysis
Chapter One: There Can't Be Just One True Religion
Chapter Two: How Could A Good God Allow Suffering?
Chapter Three: Christianity Is a Straitjacket
Chapter Four: The Church Is Responsible for So Much Injustice
Chapter Five: How Can A Loving God Send People to Hell?
Chapter Six: Science Has Disproved Christianity
Chapter Seven: You Can't Take the Bible Literally
Chapter Eight: The Clues of God
Chapter Nine: The Knowledge of God
Chapter Ten: The Problem of Sin
Chapter Eleven: Religion and the Gospel
Chapter Twelve: The (True) Story of the Cross
Chapter Thirteen: The Reality of the Resurrection
Chapter 14 and Epilogue
Characters
Objects/Places
Themes
Style
Quotes
Topics for Discussion
Order our The Reason for God: Belief in an Age of Skepticism Study Guide

The Reason for God: Belief in an Age of Skepticism Summary & Study Guide

Timothy Keller
This Study Guide consists of approximately 29 pages of chapter summaries, quotes, character analysis, themes, and more - everything you need to sharpen your knowledge of The Reason for God.

The Reason for God: Belief in an Age of Skepticism Summary & Study Guide Description

The Reason for God: Belief in an Age of Skepticism Summary & Study Guide includes comprehensive information and analysis to help you understand the book. This study guide contains the following sections:

This detailed literature summary also contains Topics for Discussion on The Reason for God: Belief in an Age of Skepticism by Timothy Keller.

"The Reason for God, Belief in an Age of Skepticism," by Timothy Keller, is a pro-Christian work which lays out the major criticisms that modern skeptics have about faith and in particular Christianity. The author takes on each criticism and provides the relevant Christian response. The criticisms include the belief that there can't be just one true religion. He points out that historically, many of the major religions teach the one-religion philosophy and provides arguments that make the case that Christianity is that one true religion. He includes the many efforts by man to repress and eradicate religion and how these efforts have historically resulted in stronger belief.

Keller addresses the discomfort that many critics have about the Bible and how Christianity has been responsible for injustice and wars. He asks that those seeking to become believers, try to read past some of the ancient passages of death and dying so that the larger, overall message is not missed. However, his belief in the Bible is complete and nothing in it can be ignored. Readers should remember that some of the passages in the Bible are written in subtext and have a deeper meaning than they initially appear to have. Keller also confronts the criticism that the Bible cannot be taken literally. He makes the connection between the accounts of the crucifixion and resurrection as told in the gospels with anecdotal information that there were hundreds of eyewitnesses to both events.

The author presents how the advancement of science has, in some cases, added more fuel to doubts about faith. He takes each case in which faith have intersection and responds answers based on his knowledge of faith and Christianity. He cites surveys in which forty percent of modern scientists are open to the concept of a god as creator. He cites that modern physicist Stephen Hawking is open to the idea of a loving god.

The second part of the book provides the reasons for faith and the evidence that Christianity is the one true religion. He describes the clues that there was a loving creator who made everything and everyone. One only has to look around at the beauty and joy of nature to wonder at their perfection. Keller also explains the role of sin in the evolution of Christianity. He probes into the basic and most important foundations of Christianity which of course begins with Jesus Christ. Keller explains why it was necessary for Jesus Christ to sacrifice himself for man's sins and why the resurrection and cross are important building blocks for belief.

Keller provides the steps that a person must take in committing to a religion and in particular Christianity. To be a believer, one must be devoid of doubt and must commit his devotion to Jesus Christ. For a Christian to flourish, he must commune with other faithful Christians.

More summaries and resources for teaching or studying The Reason for God: Belief in an Age of Skepticism.

The Reason for God: Belief in an Age of Skepticism from BookRags. (c)2022 BookRags, Inc. All rights reserved.