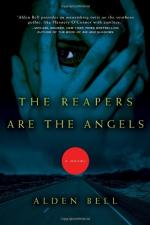 Plot Summary
+Chapters Summary and Analysis
Chapters 1 and 2
Chapters 3 and 4
Chapters 5 and 6
Chapter 7
Chapter 8
Chapters 9
Chapters 10 and 11
Chapter 12
Chapters 13 through 15
Characters
Objects/Places
Themes
Style
Quotes
Topics for Discussion
Order our The Reapers Are the Angels: A Novel Study Guide

The Reapers Are the Angels: A Novel Summary & Study Guide

Alden John Bell
This Study Guide consists of approximately 30 pages of chapter summaries, quotes, character analysis, themes, and more - everything you need to sharpen your knowledge of The Reapers Are the Angels.

The Reapers Are the Angels: A Novel Summary & Study Guide Description

The Reapers Are the Angels: A Novel Summary & Study Guide includes comprehensive information and analysis to help you understand the book. This study guide contains the following sections:

This detailed literature summary also contains Topics for Discussion on The Reapers Are the Angels: A Novel by Alden John Bell.

As the story opens, Temple is happily living alone in a lighthouse just off the Florida coast. She is content being alone but one day a zombie arrives on the shore of the island. Though he's beat up and can't be a threat at all, she realizes this means others will follow and reluctantly returns to the mainland where she finds a car and heads north.

Temple has been living on her own for many years. She doesn't remember any parents and there has never been a time during her life that there weren't zombies. She remembers a young boy named Malcolm who might have been her biological brother and she feels guilt for his death. Since he died, she has always been alone.

Now she travels north and happens upon a community living in four towers. The office building and department stores have been converted into four neighborhoods and Temple wonders if she might be able to fit in here. She soon wanders over to the tower reserved for single men and joins a poker game for a short time. When she's back in her room, a man named Abraham Todd enters and attacks her. Temple kills him and soon learns that Abraham's brother, Moses, has sworn revenge on Temple. Temple flees and, once back on the road, encounters a retarded man she later learns is named Maury. She saves him from the zombies and takes him with her, planning to find a safe place to leave him. Temple stops for a few days at a large estate belonging to the Griersons. There she connects briefly with one of the sons and agrees to kill the man's father, who is a zombie being kept in a cage in the basement. Temple plans to leave Maury there but learns he has a note with the address of his family in Texas and realizes she feels a responsibility to take him there. Moses arrives and Temple ties him up, leaving instructions that he's to be released the following day.

Temple soon discovers a clan of people who are using mucus from the zombies to create a race of giants. She, Maury, and Moses are all three captured but Temple manages to escape by killing several of them, taking Maury with her and leaving Moses a weapon so that he might have a chance of escaping on his own. Temple and Maury hitch a ride on a train to Longview, Texas, where they discover a community trying to take back a portion of the city from the zombies. Temple and Maury continue their trek south and find the town where Maury's family lives, then the house Maury recognizes. Temple quickly realizes there's something horribly wrong and when she goes upstairs she finds a couple dead on the bed, obviously having taken an overdose of pills once the zombies took over. But Temple then discovers that Moses has arrived ahead of her and she runs from the house, hoping only to draw him as far away from Maury as possible. When she emerges through the door, she encounters the little giant girl, who was kidnapped by Moses when he escaped the giant clan. The little girl recognizes Temple as murderer of her family and she shoots Temple, fatally wounding her. Moses is infuriated that Temple's death is without honor because he's come to respect her. He kills the little giant girl and then sets out on a trip, taking responsibility for Maury.

More summaries and resources for teaching or studying The Reapers Are the Angels: A Novel.

The Reapers Are the Angels: A Novel from BookRags. (c)2022 BookRags, Inc. All rights reserved.