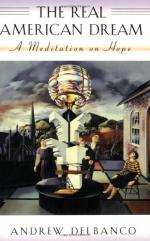 Andrew Delbanco
This Study Guide consists of approximately 23 pages of chapter summaries, quotes, character analysis, themes, and more - everything you need to sharpen your knowledge of The Real American Dream.

The Real American Dream: A Meditation on Hope Summary & Study Guide includes comprehensive information and analysis to help you understand the book. This study guide contains the following sections:

This detailed literature summary also contains Topics for Discussion on The Real American Dream: A Meditation on Hope by Andrew Delbanco.

"The Real American Dream" by Andrew Delbanco is a historical work that focuses on the roots of American culture. The author describes and explains the three major factors that have influenced America and that it has existed under. In the first chapter, "God," Delbanco explains the circumstances under which America was settled and founded. The Puritans, who believed in a strict adherence to apostolic tenets and traditions, were suffering from religious oppression in England from the Crown and Anglican Church. Henry VIII had established his own church when the Pope would not grant him a divorce. A hundred years later, the Puritans emerged in growing numbers and their religious beliefs could not co-exist with the requirements of the Anglican Church.

Through a collective need to escape religious freedom, the Crown pushing them to leave, or perhaps a combination of both, a large group of Puritan pastors and their congregations headed to the New World. While the monarchy thought they were heading for a horrid life in the wilderness, the Puritans loved their religious freedom and looked back across the Atlantic and felt that they had left what truly was the wilderness. The Puritans had a great impact on the settling of America and on the consciousness of the new country. And although their stronghold on the new nation eventually lessened and nearly faded away, the seeds they planted in the hearts and minds of the people have endured at least to some extent throughout the history of American culture.

As the Puritanical influence lost its strength, the people were hungry for something to replace "God." They longed for something bigger than itself, something they could aspire to. In the "Nation," section of the book, Delbanco describes the establishment of the new nation, a democracy where men could live free, state their minds, choose their own leaders and attain their dreams. Americans became patriotic and the focal point of their need for something to believe in became the nation itself.

Abraham Lincoln not only freed the slaves, he inspired a nation. Through the efforts and leadership of Lincoln the federal government became the symbol of justice and fairness. The visiting French historian and political observer Alexis de Tocqueville had never seen such patriotism in his life. He found it annoying. But he also noted that with the abundance of freedom and opportunity that America offered its people, also came a dark force that he called melancholy. It was an internal mechanism that stopped a person from attaining that which laid out before them because deep inside they yearned for something else.

Somewhere between the 1960s and 1980s, something died in America. The people lost their trust in their government and in each other. They were left with only themselves. In "Self" the author describes the state of modern American culture which has evolved from the initial Puritanical beliefs the country was founded on and through the struggles for the just and fair nation that Lincoln had envisioned. The country devolved into one of distrust and isolation. The modern culture is suffering under the melancholy that de Tocqueville warned of. When a nation focuses on "self" so much, how long can it survive?

But there is hope that through this melancholy and isolation, that spirit in Americans to reach for more and to return to the "sky's the limit" attitude will serve to seek out and find the next thing that the nation can believe in and that will bring America to new and unimagined heights.

More summaries and resources for teaching or studying The Real American Dream: A Meditation on Hope.

The Real American Dream: A Meditation on Hope from BookRags. (c)2022 BookRags, Inc. All rights reserved.