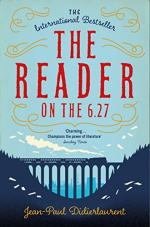 The Reader on the 6.27 Summary & Study Guide

Didierlaurent, Jean-Paul
This Study Guide consists of approximately 49 pages of chapter summaries, quotes, character analysis, themes, and more - everything you need to sharpen your knowledge of The Reader on the 6.27.

The Reader on the 6.27 Summary & Study Guide Description

The Reader on the 6.27 Summary & Study Guide includes comprehensive information and analysis to help you understand the book. This study guide contains the following sections:

This detailed literature summary also contains Quotes and a Free Quiz on The Reader on the 6.27 by Didierlaurent, Jean-Paul.

The following version of this book was used to create this study guide: Didierlaurent, Jean-Paul. The Reader on the 6.27. Translated by Ros Schwartz, Pan Macmillan, 2016.

Guylain Vignolles is a man who feels somewhat embarrassed by his unattractive name, “which lent itself to an unfortunate spoonerism: Vilain Guignol—ugly puppet” (1). He thought that maybe his life would have been different without the social anxiety that he developed because of this. Every weekday morning he took the 6:27 am train to his job as an engineer at the TERN company’s book pulping plant. Each morning, he read aloud from a few damaged pages that he had salvaged from the plant. The other commuters embraced his eccentric routine and listened with polite enjoyment. However, once Guylain left the train and greeted his security guard and amateur poet friend Yvon Grimbert at the plant’s perimeter wall, he began an utterly joyless work day.

Under the supervision of the grotesque, rude Felix Kowalski, Guylain and his cocky young coworker Lucien Brunner ran “the Thing” (13), the Zerstor 500 industrial pulping machine. It was a hideous metal monster that sometimes ate rats in addition to the trucks full of books that it daily gnashed into bits. Guylain hated it with a passion. His lunches with Yvon gave him some relief from the brutal work day, but he longed for the bitter humor of his former coworker Giuseppe Carminetti. However, Giuseppe had been nearly killed when the Thing had turned on while he was cleaning it. He had lost his legs, and after at first being accused of “gross negligence” (49) by TERN’s lawyers, he had finally been awarded 176,000 euros in compensation when faulty wiring was discovered. After he had recovered, Giuseppe set off on the quixotic quest of tracing down each copy of the book made with the batch of recycled paper that his legs had been pulped into. Guylain had decided to help him by contacting the author, and he had obtained a hundred copies of the book, which he doled out sparingly to keep his friend’s hopes afloat. Each time Guylain feigned finding a new copy, they would meet and have an elaborate Italian meal to celebrate. Afterward, Guylain would return to his sad attic apartment, where his only companion was a fish named Rouget de Lisle.

One workday morning after such a celebration, Guylain was approached on the train platform by two elderly fans of his reading, Mesdemoiselles Monique and Josette Delacote. They haltingly asked if he would read at their home, and after some hesitation, he agreed to come the next Saturday. Guylain was surprised to discover that they lived in a nursing home, and he found a large crowd of residents eagerly awaiting his performance. He read from the discarded pages, and each excerpt, even one from an erotic novel, was well received. Guylain decided to come back the next week, but even before the next work week had passed, the train brought another surprise into his life. Before he began reading that morning, he found a little red USB stick lying abandoned on his seat, and out of curiosity he picked it up and read the contents on his computer that night. It contained the journal of a young woman named Julie, and Guylain devoured the 72 charismatic, wry entries well into the night. She was a lavatory assistant in a mall, and when he finally fell asleep, Guylain felt as if Julie and her tiled domain had suddenly lit up his bleak world.

The next morning, Guylain decided to read out loud from Julie’s journal to his fellow passengers. They clearly loved her musings on everything from having to hide her writing habit at work to her aunt’s habit of eating sugar puffs in the lavatory stalls. After this positive reception, Guylain read from the journal again at his Saturday nursing home performance. He received great applause, and decided to invite Yvon to read poetry as well the next weekend. As a result of Julie’s writing, Guylain began to feel himself gaining new hope, and he even began contemplating the ways in which his father’s early death had left him with a fear of commitment.

Guylain went on reading the journal entries on the train every morning. In one, Julie described her daily routine of breakfast with her friend Josy, the crowds that descended on the mall on Saturdays, and the horrible “10 a.m lard-arse” who daily sullied her pristine stalls. When Guylain told Giuseppe about Julie and his nascent feelings for her, his friend took on the search for her as a quest. When he and Guylain next met, he showed him a map of Paris with eight possible malls he had identified through clues in the journal. Filled with hope, Guylain began searching for Julie each day after work, even as he continued reading her words on the train each morning. He knew she was single and having trouble meeting a partner, and she even tried and failed at speed dating in one journal entry. By that Saturday, Guylain had visited seven malls and was losing faith, but he was cheered up by Yvon’s antics at the nursing home. After the performance, he visited the final mall. Guylain’s heart lit up when he finally saw Julie. In the final chapter, written as an entry in Julie’s journal, Julie explained her awe at receiving a bouquet of flowers and her missing USB stick. In an attached letter, Guylain explained that he had found the stick and fallen for her when he read her writing. With great affection, he asked if she would go out with him some time. Julie hesitated, but savoring Guylain’s words through the afternoon, she decided to call him in the morning and schedule a date.

More summaries and resources for teaching or studying The Reader on the 6.27.